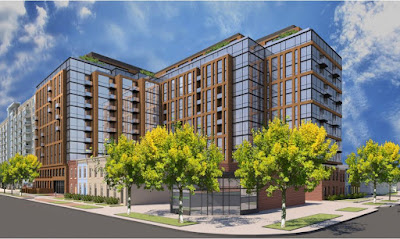 A presentation was made during Monday’s ANC 6D virtual meeting by Jefferson Apartment Group and Fortis, the new team which will be developing a site adjacent to Camden South Capitol apartments and across the street from Nationals Park at 1319 South Capitol Street. The majority of the site is currently used as a parking lot. Plans include an 11-story multifamily rental building although the number of units was not revealed during the presentation – a story in Bisnow from when the site was sold indicates there will be up to 320 units. Previous plans for 1319 South Capitol project under a different developer included less apartment units. Current plans for the project also incorporate some of the historic townhomes on South Capitol and N streets. Four of the townhomes on N Street will be converted into two Affordable Dwelling Units while two on South Capitol Street could become either commercial or residential units. The end units on both streets will be demolished to widen the alley access from N Street and provide a dog run for the apartment building adjacent to the alley entrance on South Capitol Street. The main entrance to the building will be on South Capitol Street adjacent to the alley entrance.

The development team will go back before the ANC later this fall to seek their approval as they go through the Zoning Commission process.  Construction of 1319 South Capitol is expected to start in the first half of 2021.

Renderings courtesy of Beyer Blinder Belle
Posted by SWill at 5:30 PM No comments: 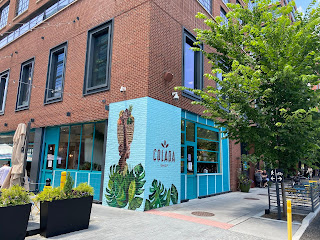 EaterDC reports that Colada Shop has opened today at the Wharf.  The Cuban-theme cafe is located on the corner of Maine Avenue and Pearl Street (10 Pearl Street). Colada Shop serves breakfast and all-day items as well as coffee, tea, and cocktails - the Wharf menu can be found here.  Hours of operation are as follows: