Construction to Begin Soon on The Kiley 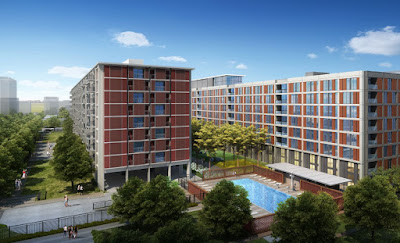 Financing has been secured for The Kiley, a planned apartment project by UIP behind Capitol Park Tower at 4th and G streets according to Bisnow. The project has been in the planning stages over the past few years and went through several iterations before receiving approval from HPRB in early 2016. HPRB approval was needed since the adjoining Capitol Park Tower was landmarked as historic, as well as the landscaping. Now planned as 315 units, construction on The Kiley will start in about four months, after the existing parking lot behind Capitol Park Tower is demolished. Therefore, delivery of the new apartment building will likely be in late 2020.

Rendering courtesy of WDG
Posted by SWill at 9:57 AM

The blog is good enough, keep up writing such type of posts.
visite site