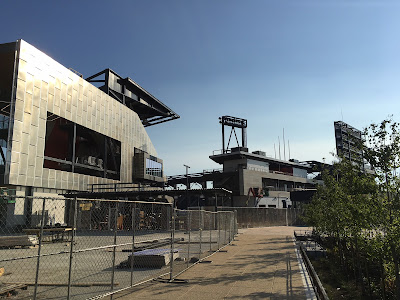 In less than two weeks, Audi Field will be open for its inaugural match where D.C. United will play the Vancouver Whitecaps. On the stadium front, more progress has been made since my last visit in June. For one, the south side of the stadium is more accessible now. Work continues on Audi Way, an extension of 1st Street that curves along the east side of the stadium, which should be completed by the end of this week. Most of the remaining work involves setting up the concessions areas. Work is being done now seven days a week in order to get the stadium finished in time.

Here are some photos of the south part of the stadium.

Here are some views on the east side:

D.C. United announced today that limited tickets are still available for the inaugural match at Audi Field. A ribbon-cutting ceremony and housewarming party will be held on Monday, July 9 from 4:30 to 7pm. The event will feature speeches from representatives from D.C. United, the District government, and Audi. The ribbon-cutting ceremony will take place at the northwest gate at the corner of 2nd and R streets. Following the ceremony, there will be a housewarming party with D.C. United players, music, games, and food, including a sneak peek of the food offerings that Jose Andres will be offering at Audi Field. While admission is free and open to the public, food and beverage will be available for purchase. There will likely be other events leading up to the grand open that will be announced in the coming days.

Here's some north and west views of the stadium:


Field House DC, which will become a pre-game spot for D.C. United matches like The Bullpen is for Nationals games, is now operational on a daily basis during the World Cup. Following the World Cup, the venue will be open on D.C. United match days and will host special events. The entrance to Field House DC is located at the corner of 1st and T streets, just south of Audi Field.