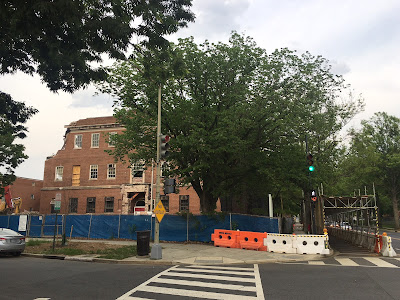 Demolition is progressing at the former Southwest Health Center site at 850 Delaware Avenue. The Unity Health Care clinic closed there back in September 2017 and was relocated to 555 L Street SE in Navy Yard/Near SE/Capitol Riverfront in early 2018. Once demolition is complete, construction will begin on the Ward 6 Short-Term Family Housing project, which will bring a 50-unit facility for homeless families to the site with a maximum occupancy of 166 people. The shelter will be a seven-story building and is designed by Studio 24 Architecture. Amenities will include space for on-site wrap around services, dining room, computer lab, laundry facilities, common rooms, and play areas. A health care facility is also planned in the building, which will occupy a portion of the first floor and basement. The entrance to the clinic will be on I Street while the shelter entrance will be on Delaware Avenue. The planned health care facility may or may not be run by Unity. 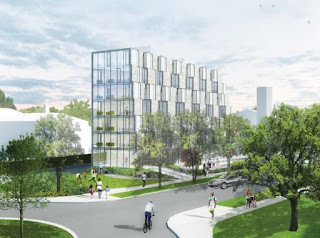 Rendering courtesy of Studio 24 Architecture
Posted by SWill at 3:54 PM 2 comments: Links to this post 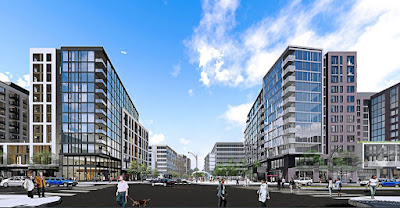 Waterfront Station and before it the Waterside Mall has served as the Town Center for the Southwest Waterfront neighborhood for decades. It contains the neighborhood’s only grocery store, as well as a pharmacy, restaurants, and professional services, including a dentist office. Two office buildings fully occupied by District government agencies and three rental apartment buildings are currently in place and a future phase with more rental apartments, retail, daycare center, and a black box theater is planned on the northeast parcel. Two other parcels have yet to be developed, which flank 4th Street and are located adjacent to the Waterfront Metro station entrance.

The original stage one Planned Unit Development (PUD) approval for these two sites at 4th and M streets was for office, but developer Forest City has requested a change to residential. Its reason for the change in use is due to unfavorable conditions in the office market. The state of the office market has changed significantly since the Waterfront Station development was originally conceived in the aughts. Previously, the development was intended to be primarily office, with less retail and minimal residential. Prior to the Great Recession, Fannie Mae was going to move its headquarters to Waterfront Station, but they pulled out in the wake of financial troubles at the quasi-government agency. Over time, the plan for Waterfront Station has evolved in favor of more residential and retail and less office.


In its current proposal, Forest City plans to develop a 285-unit rental apartment building on the east parcel (375 M Street) with 18,830 square feet of ground floor retail along M Street and the Metro plaza, 32,400 square feet of commercial space intended for professional services tenants on the second floor, and a 6,000 square-foot community center on the first and second floors. This would be the third community center located in Southwest, joining the Randall Recreation Center and King-Greenleaf Recreation Center, but it would be the only one without adjacent recreation fields. The community center was proffered by the developer to win approval from ANC 6D, which was originally lukewarm to the idea of changing uses at the two remaining parcels at Waterfront Station from office to residential. As a part of the PUD, the developer has offered the community center rent-free for a period of 30 years and will contribute up to $565,000 for interior design and fit-out, furniture, fixtures, equipment, and initial start-up costs.

On the west parcel (425 M Street), the plan is to develop a 310-unit rental apartment building with 21,203 square feet of ground floor retail along 4th and M streets. The main residential entrance will be located at the northeast corner of the building. In both buildings, 8% of the floor area will be reserved for residents earning up to 60% of Area Median Income (AMI) and of that total, five units will be 3BR apartments. Under this proposal, the east parcel will be developed first, allowing for the west parcel to remain open space until the completion of the 325 M Street building. Part of the west parcel will house a trailer that will be the interim Southwest Branch library while a new library is built in its current location at 900 Wesley Place.

For its part, the ANC has offered conditional support for the PUD. Portions of the PUD that the ANC supports include the community center, as well as the redesign of the project which provides less density and more setbacks than the original office design, a retail strategy, and traffic plan. However, one of the concerns brought by Commissioner Roger Moffatt, whose single-member district includes the 375 M Street site, was the ability for mom and pop retailers to occupy smaller spaces at the proposed development. It has proven to be difficult to get smaller retailers into the previous phases of the development since the buildings would not allow a tenant who needed less than 1,200 square feet to occupy space. While the U.S. Postal Service is not a “mom and pop” retailer, it was used as an example of a tenant that was unable to relocate to Waterfront Station because its need for a 900 square-foot space could not be accommodated. Other outstanding issues brought by ANC Vice Chair Andy Litsky include the selection of the community center operator and clarification on the “free rent” provision to include HVAC and electricity; improvements to public space at the Metro plaza; a traffic plan for the 4th and M streets intersection; placement of the Metrobus and Circulator bus stop along M Street; and other logistical concerns.

The Zoning Commission will continue the hearing on May 10th and a final decision on the proposed development is expected in the coming months.

Renderings courtesy of Forest City
Posted by SWill at 8:47 AM No comments: Links to this post 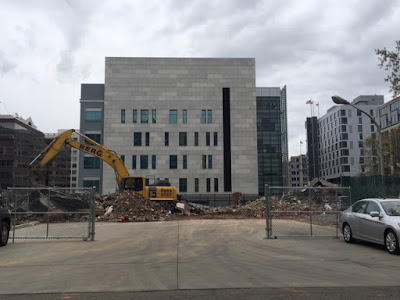 The former DC FEMS Engine 13 building at 6th and E streets has been demolished to make way for a mixed-use development by E Street Development (h/t to reader Ben). A raze permit was filed back in November for the building. E Street Development is planning a 253-key citizenM hotel on the site, as well as a 194-unit mixed-income rental apartment building, and 10,750 SF of ground floor retail. The residential portion of the project will include 58 affordable units (ranging from 30% to 50% of Area Median Income) for seniors ages 62 and older and 136 market-rate units for all ages. E Street Development won the rights several years ago to develop this parcel, along with a vacant site cattycorner to it on 4th and E streets, which became a Hyatt Place hotel with a new Engine 13 firehouse on the ground floor in 2015. 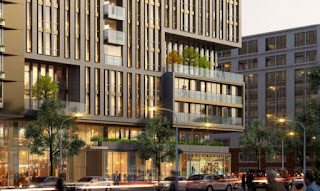 The block where the former Engine 13 building was located also was where MPD’s First District headquarters used to be, which was on the northwest corner of 4th and E streets before it was relocated to the former Bowen Elementary School building along M Street in 2009 and the city’s Consolidated Forensic Lab was built in its place.

Rendering courtesy of E Street Development
Posted by SWill at 10:34 AM No comments: Links to this post