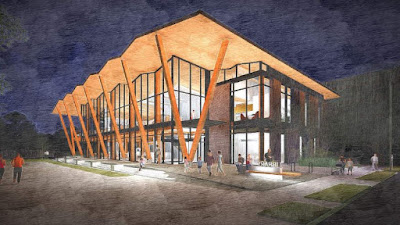 In early January, DCPL submitted an application to the BZA in order to build a new, standalone Southwest Branch library at 900 Wesley Place. The existing library was built in 1961 and no longer serves the needs of a growing community, where thousands of new multifamily units are coming online within the next five years. After a series of public meetings, DCPL developed a plan for the library which provides separate spaces for children and adults. 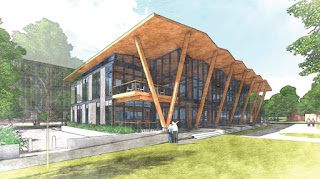 Designed by Perkins + Will, the new Southwest Library takes cues from the modernist design of the neighborhood with the use of wood, metal panels, glass, and a distinctive crinkle roof. The new library will be similar in size to the existing one at 20,792 SF, but there will not be a basement due to concerns over flooding since it is below the floodplain. Parking will be provided for seven vehicles, a reduction in the number of spaces currently available at the library by two. A landscape buffer will screen the parking area from the sidewalk along 3rd Street. Green features will include, among other things, a green roof, photovoltaic panels, and bioretention areas, sufficient to secure LEED-Gold status for the building.

DCPL is seeking approval for the project and has requested three special exemptions from zoning regulations. One special exemption has to do with parking – zoning requires a government building of this size to have nine spaces, but DCPL wants to build seven surface spaces. Since the library is close to the Waterfront Metro station, two Metrobus routes, and within walking distance of most of Southwest, DCPL contends there will be sufficient parking. The second special exemption is for long-term bicycle parking – DCPL will provide one less space than required. Finally, the third special exemption is lot occupancy – it is required that up to 40% of the lot be occupied by the new building, but the design calls for 47% lot occupancy. All three special exemptions have been requested in order to maintain the current design of the new library. At its December 2017 meeting, ANC 6D voted 3-0-2 in support of the BZA application.

If approved by the BZA, demolition of the existing library will likely take place this fall, after an interim library location is found. Construction will take a little more than a year and the new library will be complete in early 2020.

Renderings courtesy of DCPL
Posted by SWill at 10:43 AM