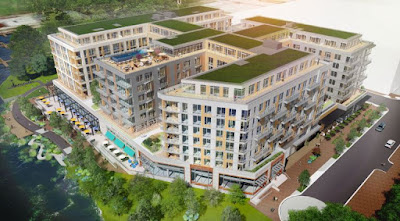 The Washington Business Journal reports that construction of River Point (also known as the former Coast Guard Headquarters building) at the tip of Buzzard Point at 2100 2nd Street is expected to start in the second quarter. Once the project is complete in 2020, the former office building will be converted to a 485-unit apartment building with about 60,000 SF of ground floor retail, most of it facing the Anacostia River. According to the article, targeted retailers include: “waterfront restaurants, retailers, a drug store, neighborhood amenities and a food hall.” Construction will start with gutting the office building to allow more light in the planned residential units. 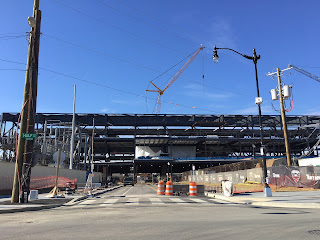 DC United held a topping off ceremony last Friday for the construction of Audi Field. Fans got to sign the last beam to be installed on the structure. The team’s first match is scheduled for July 14. 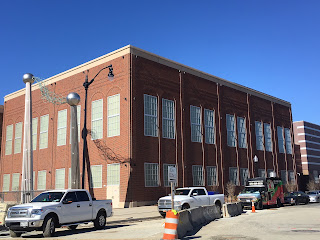 Across the street from the stadium, sidewalks around the new Pepco Waterfront substation at 1st and R streets have been opened. One of the public artwork pieces commissioned for the building has been installed at the southeast corner of the substation, located across from Audi Field at 1st and R streets. 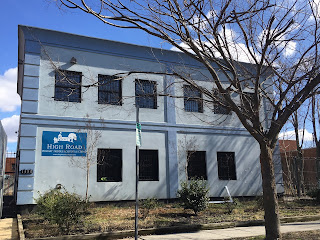 A second all-affordable apartment development could be on the boards for the same block of 1st Street after a 76-unit project was approved for the Shulman Liquor site. The High Road Primary & Middle School building for sale on the 1500 block of 1st Street may be used by a developer to satisfy an affordable housing requirement at Capitol Crossing, a major mixed-use development under construction over the Center Leg Freeway (I-395) in Northwest. According to a Washington Business Journal article, the affordable housing requirement for Capitol Crossing would be met by building a 100-unit apartment building at 1530 1st Street for households earning up to 30% and 50% of Area Median Income. Legislation was introduced by D.C. Council Chairman Phil Mendelson back in December which would allow the affordable housing requirement shift to the Buzzard Point site.