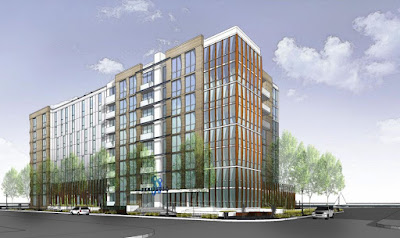 According to the Capitol Riverfront BID, a ceremonial groundbreaking for Peninsula 88 condos in Buzzard Point was held late last month. The condo project site from Capital City Real Estate is located adjacent to the shuttered Buzzard Point Marina at 88 V Street. There will be a total of 110 units with a mix of 1BR, 1BR/den, 2BR and penthouse units. Prices will range from $500,000 to $2.5 million. 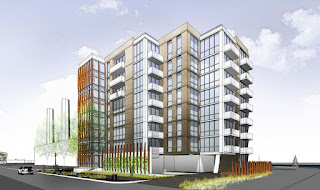 This is the first residential building to start construction in Buzzard Point south of Q Street. Other proposed projects include Riverpoint, the redevelopment of the former Coast Guard headquarters located to the west of Peninsula 88; 1900 Half Street, a former office building that will be converted to a 462-unit apartment project; 1800 Half Street, the site of warehouses and Ziegfield’s/Secrets that will be redeveloped as an approximately 300-unit apartment project. In addition, the vacant “Parcel B” adjacent to Audi Field may one day contain a residential component. Akridge’s 100 V Street parcel may also include residential (if Amazon H2Q doesn’t locate there).

Even though a groundbreaking ceremony was held on October 26, actual construction has still not started. Sales at Peninsula 88 are expected to begin in 2018 with delivery in about two years.

Well, there goes the neighborhood.