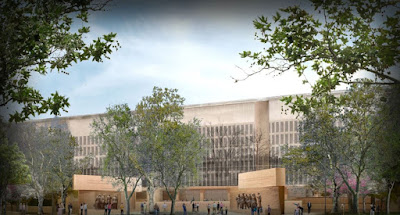 After the design received final approval by the National Capital Planning Commission earlier this week, a groundbreaking ceremony is scheduled for the long-planned Eisenhower Memorial on November 2. The Frank Gehry-designed memorial for the 34th president will be located on a four-acre site across from the National Air & Space Museum on Independence Avenue and 4th Street. The memorial will feature metal tapestries that will depict scenes from President Eisenhower’s life. They will also serve as a screen to block the view of the Department of Education headquarters building adjacent to the memorial site. Bronze statues depicting Eisenhower as Supreme Allied Commander during World War II and as president are also featured.

Part of the memorial site used to contain a community garden, which will be removed in order to build the project. Construction is expected to last 30 months, which will allow the memorial to debut in time for the 75th anniversary of V Day on May 8, 2020.