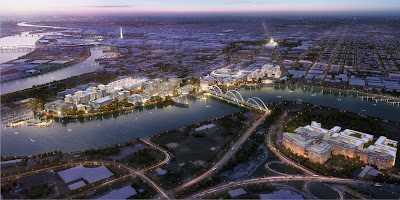 The Bowser administration this week released details on the four areas of the District that city officials are supporting in its bid to win the continent-wide competition to lure the second headquarters campus of Amazon. One of the four proposed areas is dubbed the Anacostia Riverfront, an area that includes portions of Capitol Riverfront and Poplar Point. The Capitol Riverfront parcels include undeveloped portions of the Yards in Southeast, as well as most of Buzzard Point. In all, 12.6 million SF of development potential exists, which would be sufficient to fully build out Amazon HQ2. Not all of it would be built as once – an initial phase could accommodate 1.4 million SF of space with a portion being built at Riverpoint (former Coast Guard headquarters) in Buzzard Point. In the District’s press release, it describes the Anacostia Riverfront neighborhood as a “riverfront entertainment hub accessible by land and water.” 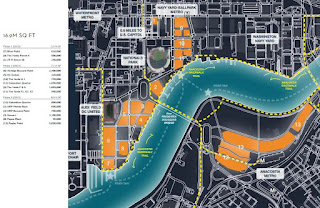 From the press release:

The Anacostia Riverfront proposal provides riverfront space along one of Washington, DC’s main waterways. It offers the best of two worlds: a breathtaking river corridor with more than 1,200 acres of parklands integrated into a high-density and transit-oriented community that is accessible by walking, biking, metro, ferry, or even kayak.

The other neighborhoods under consideration are NoMa-Union Station, Capitol Hill East, and Shaw-Howard University. Bids for the Amazon HQ2 RFP are due on 10/19. The company is expected to select a winner sometime in 2018.

Renderings courtesy of DMPED
Posted by SWill at 1:16 AM