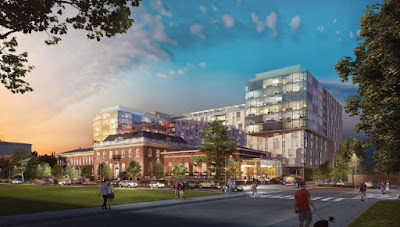 Now that Lowe Enterprises has been brought on as a developer partner in the redevelopment of Randall School on I Street to a mixed-use project, revisions have been made to the previously approved (and recently extended) PUD. One major change to the previous PUD is the removal of an annex building for the museum, which results in a larger courtyard separating the historic Randall School building and the proposed apartments. In addition, the design of the apartment building has been revised to further open up the courtyard – a portion of the wings of the apartment building was pulled away from the historic building. The courtyard will be open during the day and closed at night with gates.

The east and central buildings will contain an approximately 32,000 SF modern art museum. The museum entrance has been shifted to the east building, which will allow the center building to be fully restored. Originally, a restaurant was planned in the east building’s auditorium, but instead this space will contain museum space with larger pieces of art, as well as ancillary retail (café, bookstore, gift shop). A mix of commercial, retail, and non-profit uses are still planned in the west building, but a mezzanine level will be added to increase the amount of usable space.

Meanwhile, the residential entrance will now be in the center of the apartment building on H Street. The number of units have been reduced from 520 to 489 units. While the number of units have been reduced, the percentage of units set aside as affordable will remain – 20% of the units will be set aside as affordable to households earning up to 80% of Area Median Income. Most of the units will be apartments, but a portion may be built as condos. The parking garage entrance has been moved to the northeast corner and a total of 301 spaces are planned. The ground floor of the apartment building might include retail/service uses and two-level units might be created. Penthouse configuration and trellis placement are also changing slightly. The Bing Thom-designed apartment building has been refined by Beyer Blindle Belle, simplifying the façade to allow balconies and to further distinguish the historic Randall buildings from the new construction.


If approved, abatement of the historic buildings are expected to start in late 2018, then demolition of the non-historic portion, which would likely put the start of construction in 2020.

Renderings courtesy of Lowe Enterprises
Posted by SWill at 12:40 AM