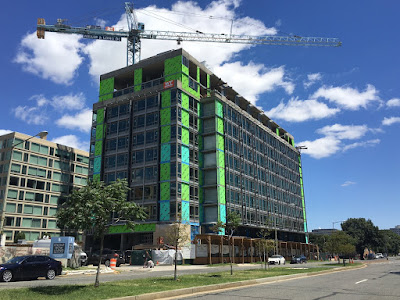 Most of the new residential buildings under construction in Southwest are rental apartments - the only condo building currently under construction is VIO at District Wharf. Above is a photo of 301 M, which is the rental apartment building furthest along, aside from District Wharf, by The Bernstein Companies. Since these pictures were taken in early August, progress has been made on the buildings, especially Valo, the chosen marketing name for the apartment project attached to the new St. Matthews at 222 M Street, developed by Trammell Crow Company, High Street Residential, Meadow Partners, and CSG Urban Partners. A few more floors have been added to the building since the below photo was taken. Advertising went up last month for Valo, a Finnish word meaning light or glow.

Another project making progress is the two-building addition to The View at Waterfront along M and K streets from Mill Creek Residential Trust. Both buildings are mid-rise structures with a concrete base and wood-frame construction above.

Meanwhile, the Riverside Baptist Church project at 7th and I streets by PN Hoffman is still a hole in the ground. Construction began earlier this year and won't be complete until 2019. The most recent addition to the construction list was 1399 Maryland Avenue at The Portals, a 373-unit apartment building which started a couple months ago by Republic Properties.

You are correct - it's been fixed.