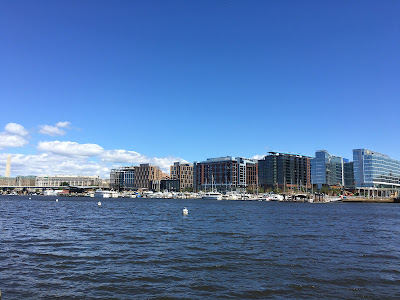 On a picture perfect Saturday, I decided to go around and take photos of most of the construction activity in the quadrant. First up was District Wharf. It’s hard to believe the first phase will finally open in less than two months! Of course, portions of the first phase are already complete - 525 Water and St. Augustine's Church were completed in 2016 and Waterfront Park, with a portion dedicated to DC Delegate Eleanor Holmes Norton opened last spring. Leasing has begun at both apartment buildings along Maine Avenue – Incanto and The Channel. Meanwhile, a large share of the condo units at VIO have already been pre-sold and two of the office buildings have landed tenants that traditionally wouldn’t locate in Southwest, including a law firm. One tenant I neglected to mention previously is Washington Gas, which according to the Washington Business Journal will move its headquarters from 101 Constitution Avenue NW to 1000 Maine Avenue and will occupy at least 70,000 SF of space in two floors. The Anthem continues to line up acts for its inaugural year of operations, including Foo Fighters, who will perform on opening night - October 12. Dozens of restaurants will be opening in the coming months, although only a few non-restaurant retailers have been announced so far, such as CVS, District Hardware & Bike & Cafe, The Press, Bella Moda Salon and Spa, and Cordial Craft Wine, Beer & Spirits. Below are some photos taken from East Potomac Park:


From Maine Avenue, one can see more details coming along, including signs for parking garages and entrances to buildings. Don't try to follow the parking garage signs just yet though...the garages are not open to the public yet.  See below:

So freaking excited!!!! Thanks for the pics.