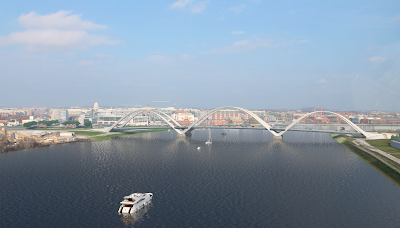 A new design for the replacement Frederick Douglass Memorial Bridge which brings South Capitol Street across the Anacostia River was revealed yesterday at a press event with Mayor Bowser, DC Delegate Eleanor Holmes Norton, and other dignitaries. The new design is a departure from the previous version that looked more traditional and swung open to allow large boats to traverse the Anacostia. Since the display ship U.S.S. Barry that was docked at the Navy Yard was dismantled and moved, there was no longer a need to have a swing span bridge so the design was updated. According to a press release, the new bridge design includes three above-deck arches that capture the District’s arch history, two piers that will appear to float in the river, and four pedestrian overlooks. The new bridge will carry six lanes of vehicular traffic (three on each side), as well as bike and pedestrian lanes on each side of the bridge. In addition to the new bridge, traffic ovals will be built on both sides of the bridge – the oval on the west side of the river will connect South Capitol Street with Potomac Avenue and Q Street.

The bridge project is part of the South Capitol Street Corridor Project, a two-phase project that will eventually include additional improvements to South Capitol Street and adjacent streets on both sides of the river. On the west side of the river, improvements in phase II will reach all the way to the intersection with the Southwest freeway. Construction on the first phase will begin in late 2017 and will run through 2021. More images and an animated video showing the bridge project can be found on the project website.
Posted by SWill at 10:04 PM