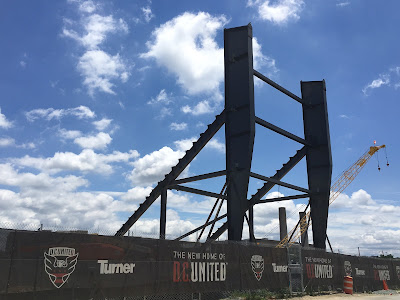 Vertical construction is underway at Audi Field, the future home of D.C. United at 2nd and R streets in Buzzard Point. The most visible portion so far is on the western side of the construction site along 2nd Street, where a portion of the stands has been erected. A groundbreaking ceremony occurred in February after the Zoning Commission approved the PUD for the project, but site work was underway for several months prior. A webcam has been installed so you can keep track of construction progress. Across R Street from the stadium site is the new Pepco substation, which is concurrently under construction. Its brick exterior is visible in the photo below looking north. An easement for Pepco transmission lines runs below the stadium site and will connect to the new substation. 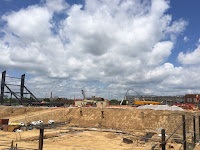 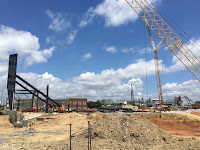 Audi Field will contain about 20,000 seats and 31 luxury suites. An adjacent site on the east side of the stadium will eventually contain mixed-use development, likely to be retail and residential. The stadium is scheduled to be completed around June 2018, so D.C. United will need to play the first portion of their season on the road since their lease at RFK ends this year.
Posted by SWill at 12:59 PM

Thanks for keeping us informed!