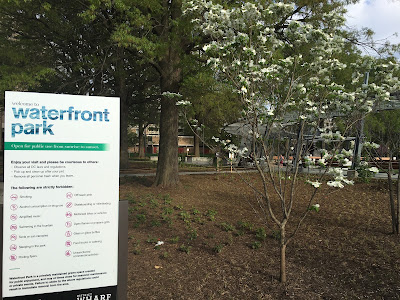 A little more than a week after Waterfront Park opened to the public at District Wharf, I was able to get a tour with the landscape architect for the project. The park was designed by LAB, with the assistance of a group of 35 Southwest residents (myself included) who were selected by ANC 6D to serve on a committee to design the park through a series of charrette planning sessions. Elinor Bacon from Hoffman-Madison Waterfront convened the charrette planning sessions at the request of ANC 6D, which stipulated in its approval of the stage one PUD application that the park be built in the first phase of development and a public process was needed to help design the park.

During the charrette process, the design elements most important to the participants were the following:
All of these elements are present in the park in some form or another. It was desired by the community for the park to be more tranquil than other area of District Wharf, since it borders existing residential complexes such as Tiber Island and Harbor Square. While some of the plantings have yet to take root, the fences are down and the park is open for everyone to enjoy. I took plenty of photos while on the tour:

awesome park. would have loved the addition of a water feature, but I know there are some coming with other Wharf projects.

I love everything except the bocce courts. I don't know anybody living in SW DC that plays bocce. It seems like a 'bro' game limited to participants from NW, but maybe that's just me. My complaint is how central the bocce courts are, how much space they take up in that location right next to the storage shed, and that there is only a single water feature in the northern part of the park. It feels as though there should be water under the peaceful wooden footbridges as well rather than just vegetation. The strollability of the park is, however, really good. And the scale feels right, too. The interactivity of the northern water feature is effective and lovely. The trees chosen were pretty and nice. The stone is beautiful. There are a lot of wonderful elements overall, but I just hate the bocce's centrality and size and want more water features. Everything else, including the large grassy circular area, I am pretty happy with.

I dont quite understand the overhang by the benches. Like what purpose does it serve? Its glass so it doesnt provide any shade and its not large enough to actually keep you out of a light rain. I guess its a design feature but it just seems out of place to me.

The footbridges at the southwest corner of the park do cross over water... when it rains. I did forget to snap photos of the little pond that was there during the soaking rain early this month. The little stepping stones across the water feature are just challenging enough.

It's funny that bocce is now seen as a game for young dudes, because until a couple of years ago I knew it (and petanque) solely as something old guys played.

One annoyance: the walkway that continues N St. has two steps, so anyone on wheels trying to get from 4th St. to the water has to detour a block north or south.

There are Vines at the bases of the non glass sections of the pergola. The vines will grow up the pillars and be woven into the cabled overhead sections. This will brings plants and flowers overhead. It will resemble the rose gardens at the Hillwood Estate in NW

I forgot the pond thing is a water feature. The first couple times I went it wasn't full. I was thinking more fountain or waterfall or splash park. Something you don't have to be standing over to see.

During construction I thought the "shed" was actually going to be a pubic bathroom and I was super excited! why are there no public restrooms in the city? Seems like if you want people to spend time in the park, would be a nice amenity. Otherwise, everyone has to go home, stop into cantina marina, etc. I know, probably no one wants to pay for it's upkeep, but it is odd that DC has none that I know of....

It would be nice to have a couple of trash cans