In addition to Forest City’s request for an extension of their PUD at Waterfront Station (and potential change in use from office to residential), PN Hoffman is seeking a two-year extension for the NE parcel next to CVS. Last year, PN Hoffman won the development rights for this parcel from DMPED to build a mixed-use project with ground floor retail, a black box theater, and 443 rental apartments. While extensions have been granted for the site before by DMPED, this is the first request from the developer of the project. PN Hoffman is still working on a disposition agreement with the city and intends to start the PUD process for their proposed project next winter. 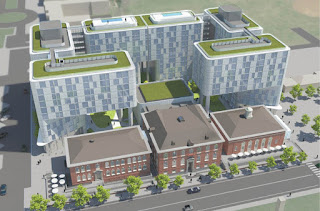 Another extension is being sought for the Randall School project, a long-planned development on I Street. Similar to the Waterfront Station project, this extension is being sought by a new developer. Lowe Enterprises recently came to an agreement with Telesis/Rubell to become the primary developer of the project. While the main elements of the project will remain, including a modern art museum, retail, commercial space, and mixed income apartments, some changes are planned. According to the developer, the two-year extension will allow Lowe Enterprises to make modifications to the plan to make the project work financially. If the extension is granted, a building permit would need to be obtained within two years and another year for construction to commence. Abatement of the historic buildings are expected to start in late 2018, then demolition of the non-historic portion, which would likely put the start of construction in 2020. 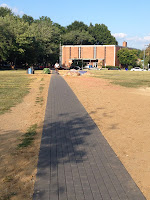 Both of these extensions were presented at the April ANC 6D meeting and were supported by the commissioners. On the Waterfront Station site, the commissioners want PN Hoffman to maintain the brick pavers and activate the site prior to construction. At Randall, Lowe Enterprises has agreed to maintain the derelict property and put up signage touting plans for development.
Posted by SWill at 12:05 PM

Unfortunate but understood.... I'd imagine PNH has their hands full with the Wharf. Was really looking forward to that diner though!

Hopefully, Lowe's involvement will accelerate Randall School; we don't want it to miss the current cycle. CityVista was quite visionary for its time, and now that they've wrapped up the Hepburn building (the apartments nestled into the Hinckley Hilton) their apartment team probably needs something new to do. Telesis is very creative with what they do (e.g., Ellen Wilson Homes), but their portfolio's mostly in the affordable/subsidized field; Lowe probably has better contacts among lenders for market-rate buildings.

I was surprised at how quickly PN Hoffman moved forward with the Riverside Baptist site, but their project managers definitely have their hands full even without dealing with DMPED.

Green space or building/diner - win/win for me

Really hope development of the Randall School can get going sooner rather than later. It would be a vast improvement to the neighborhood to activate that area of I Street. Plus it's a great old building full of charm and character, and it would be nice to finally see it refurbished rather than continuing to deteriorate.