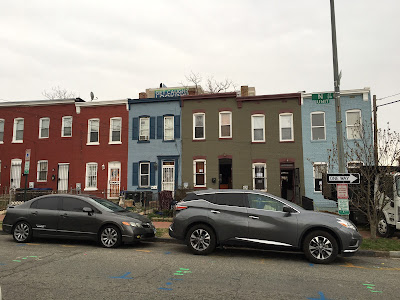 Demolition permits have been filed for several rowhomes along South Capitol and N streets in preparation for the development of a new high-rise multifamily building next to Camden South Capitol apartments. Asbestos abatement is underway at the small rowhomes, which date to the early 1900s. A DC Council hearing was held on March 30 to get approval to temporarily close an alley off of N Street that connects to South Capitol Street during construction. ANC 6D gave its support several months ago. The alley will be the access point to the parking garage of the building, but it serves as an outlet to South Capitol Street for area residents. It will reopen once construction is complete as an easement – the air rights above a portion of the alley will be used to build the apartment project. 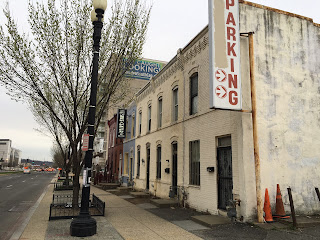 Some of the surrounding homeowners are concerned about the proposed alley closing to construct the building, as well as potential damage to their homes once some of the rowhomes owned by the developer are demolished. A rowhome on N Street and two on South Capitol Street closest to the alley may be demolished to make the alleyway larger. Others may be demolished as well. An older rendering showed six rowhomes remaining on South Capitol Street, but the latest rendering revealed at Monday’s ANC meeting shows only four, starting with the blue South Capitol Smile Center building.

The new rental apartment building is planned as a 250-unit project with ground floor retail, designed by PGN Architects. Altus Realty Partners is expected to start construction on the project later this year with completion in 2019.
Posted by SWill at 11:20 PM

Very exciting to see a building project on this side of South Capitol with retail included. More pictures are here!

Thank you for posting-- this is exciting news. Hopefully the days are numbered for the liquor store on the corner of So. Capitol Street as well.

@Ben go ahead and paste it into the address bar.

@Gregory - link didn't work for me either...

You might want to try another browser. I couldn't load the site using Google Chrome but was able to seen the nice renderings using my I-pad.

I am excited for this development and it will be a big improvement for the So. Capitol St. corridor.

http://www.pgnarchitects.com has all the information if you link on projects. High resolution pictures as well!

The link works in Google Chrome for me. @Ben - The liquor store is not part of the development site as of now.

Thanks for this update! Great news about the construction. Correct me if I'm wrong, but it looks like the developer paid some of these owners close to $1m... I daydream about this scenario for my Buzzard Point-adjacent rowhome haha