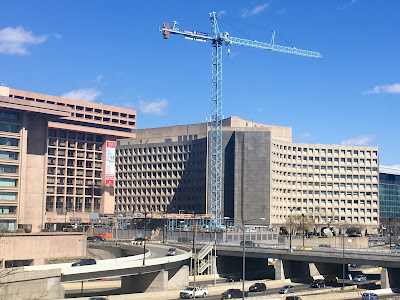 Construction has resumed at 500 L’Enfant, an office building along 9th Street at L’Enfant Plaza. The foundation and loading dock was constructed back in 2015, but the project was put on hold until an anchor tenant was found. In January, it was announced that the Urban Institute would lease 121,000 SF of space, covering the first six floors of the 12-story building. Over 400 employees are expected to make the move by March 2019. The building itself will likely be completed in 2018, but then tenant buildout will take several months. 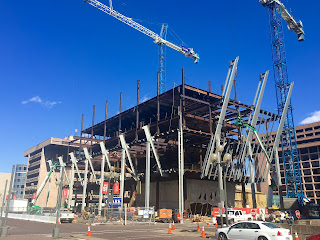 Elsewhere at L’Enfant Plaza, construction is ongoing at the International Spy Museum on 10th Street. The museum will relocate from Penn Quarter to L’Enfant Plaza in 2018. In addition, renovations have been underway at the future Hilton Washington DC National Mall hotel. The hotel will also reopen in 2018.
Posted by SWill at 10:14 PM