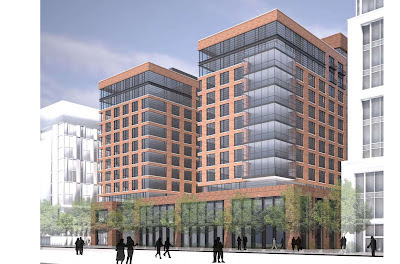 Banners were recently placed on the apartment buildings under construction at District Wharf. Parcel 4A apartments (or 770 Maine Avenue) is now known as Incanto. The word incanto is Italian for “to attract and delight” or “to cast a spell.” Most of the brick along the Maine Avenue façade of the building is already up and a splash page for the project indicates that residents will be welcomed to the 175-unit building in the summer of 2017. The building will contain studio, one bedroom, and two bedroom units. District Hardware & Bike will be on the ground floor of Incanto with an address of 730 Maine Avenue. The 6,400 SF store, designed by Natalie Park Design Studio, will offer outdoor café space, two entrances, a glass garage door that can be opened on nice days, and a walk-up window where Vigilante Coffee will be sold. The bike shop will feature a bicycle fit studio. In addition to being a hardware store, bike shop, and café, the store will sell marine supplies, fishing rods, and stand-up paddleboards. With 7th Street Recreation Pier around the corner and a protected bike lane in front of the store, the location fits well with its hybrid retail concept. 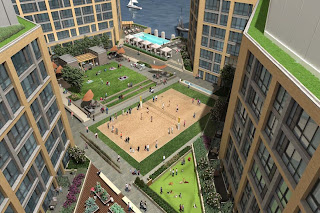 Meanwhile, the larger apartment project located at Parcel 2 will now be called The Channel, named presumably after the Washington Channel, the body of water separating District Wharf from East Potomac Park. The two-building apartment complex wraps around the Wharf Hall concert venue, which itself will be renamed something else before it opens next year. Several of the units in this 500-plus unit building will be micro units with Murphy beds and other built-in furniture. A unique feature of the building will be the large Wharf Club complex on the roof of Wharf Hall, containing a 7,000 SF fitness center, meeting space, infinity pool and one-acre park. According to the splash page, leasing will begin in the spring. However, I suspect move-ins won’t start on this project until after Incanto, perhaps in the fall.

Renderings courtesy of Hoffman Madison Waterfront
Posted by SWill at 8:00 AM