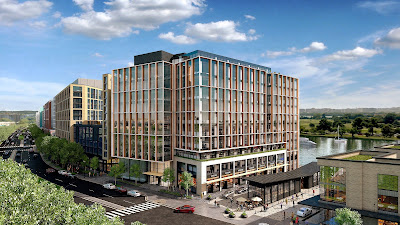 It was announced at a press event this morning with the Spanish tall ship replica El Galeón as a backdrop (alas, I was unable to attend) that law firm Fish + Richardson will occupy 60,000 SF of space on the top two floors of 1000 Maine, a 250,000 SF trophy office building just starting to come out of the ground on parcel one of District Wharf next to the...Municipal Fish Market. The law firm will move from its current downtown location by May 2018. This is the first office tenant announced for 1000 Maine, but more than 65% of 800 Maine has already been pre-leased. The third office building under construction is Pier 4, which will be partially occupied by Entertainment Cruises. In other tenant news, more retail leases were announced:
Bisnow reported that two additional retailers will be coming as well, including Ben & Jerry’s and Bella Moda Salon & Spa. 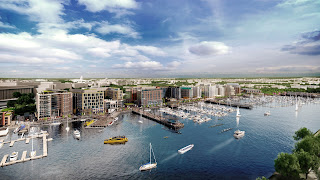 Entertainment Cruises will operate a water taxi service which will connect District Wharf with Georgetown, Nationals Park, Old Town Alexandria, and National Harbor, as well as the potential for a larger network in the near future (perhaps to the new D.C. United stadium in Buzzard Point or Reagan National Airport?). The vessels will have a maximum capacity of 100 and will allow bikes and luggage on board. They will also have WiFi access and outlets available. Using new vessels designed for faster travel in no-wake zones, a water taxi trip from District Wharf to Old Town Alexandria will take about 20 minutes. The water taxi service will operate from March to December, with peak season from Memorial Day to Labor Day with three routes that pick up passengers at District Wharf more than 10 times daily. During the non-peak season, there will be less frequent service with a minimum of four pick-ups per day.

In addition, during Monday’s ANC 6D meeting it was announced that a free water taxi jitney will connect District Wharf with East Potomac Park. The boats will hold up to 12 passengers and will depart District Wharf from the Transit Pier. A new pier will be built in East Potomac Park near where a historic pier was located. The jitney will also operate from March to December.

Meanwhile, construction continues on Z Dock, which will be used by the liveaboards at Gangplank Marina once completed in early 2017. Afterwards, the docks by what was formerly 7th Street Landing will be demolished so construction can begin on the 7th Street Recreation Pier. Portions of the park near the Titanic Memorial have reopened and Waterfront Park should be completed by April 2017. While the Washington Business Journal reports that the Washington Kastles will not return to The Wharf in a planned floating barge, part of the Transit Pier will have an ice skating rink during winter. 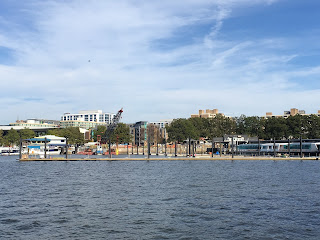 The first phase of District Wharf is scheduled to be complete by October 12, 2017, but initial planning is already underway for phase two (parcels 6-10), which includes the Gangplank Marina, three office buildings, an apartment building, a condo building, retail, and public spaces. The design team has already been selected and plans will be submitted to the Zoning Commission in 2017 with a hearing likely scheduled for next summer. Parcels 8 through 10 are referred to as Phase 2A, which will get underway sooner than the other remaining parcels. Here is a summary of what is currently planned at each parcel:
Construction on Phase 2A is expected to start in mid-2018 with completion in 2021, so there will be less than one year of a lull in construction between phase one and phase two.

"...parcel one of District Wharf next to the...Municipal Fish Market."

Wonder how that'll turn out when the violent locals, who are always at that fish market, turn on the poor lawyers. There's a reason they have armed guards there, now.

"the violent locals" -- ??? what are you talking about? Maybe there was a single violent incident you're referring to, I don't know, but in 11+ years in Southwest, I've never seen anything resembling violence at the fish market. Do you have some agenda? I've never heard anybody feel bad for a lawyer over a local. is there something going on underneath your comment?