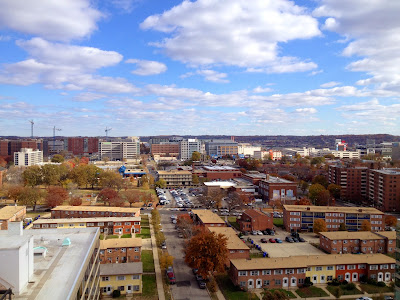 There was a Greenleaf community meeting back in the summer which gave an update on the long process ahead to redevelop Greenleaf as a mixed-income community. There were two other community meetings in March 2016 and October 2015 where input was gathered on the redevelopment plan.

In order to start the redevelopment process, the Housing Authority has made a commitment to using a “Build First” model, so existing residents are not displaced from the neighborhood while the public housing complex is redeveloped over the next several years. Two nearby publicly-owned sites have been identified as potential candidates to build the initial phase of the redeveloped Greenleaf. One is the parking lot adjacent to MPD’s First District headquarters at the northeast corner of Delaware Avenue and M Street. The other site is the DC FEMS Engine 7 repair shop at Half and M streets.


The preliminary development plan developed by the consultant HR&A Advisors would first involve the construction of a mixed-income building at the selected “Build First” site so some of the existing residents can move there to allow for a phased demolition of the existing Greenleaf buildings, starting with the townhouses along M Street. In the preliminary development plan, there are a mix of housing types and heights. Generally, the building heights are highest along M Street and taper down to the north and south. The redevelopment of the 15-acre site is split into four blocks:

Excluding the “Build First” phase of development, nearly 1,900 units would be built at Greenleaf, replacing the existing 493 units of affordable housing and adding a significant amount of market-rate housing. Nothing new has happened since the July meeting, but the next step in the process is to come to an agreement with the District on a site to do “Build First.” Following that, the redevelopment plan needs to be finalized and then the Housing Authority will issue a RFP to select a developer partner.
Posted by SWill at 5:53 PM