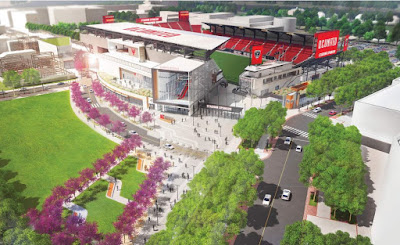 D.C. United recently submitted supplemental materials to the Zoning Commission ahead of its rescheduled hearing on November 28. The hearing was originally scheduled for November 2, but it was delayed after the team got pushback from neighboring developers and ANC 6D about the previous design of the stadium. In a letter dated yesterday to the Zoning Commission, the applicant made changes to the alignment of 1st Street to allow for 14,000 SF of retail along the east side of the stadium as well as parking on both sides of the street. The street now has a curve, which reduces the size of Parcel B, and it will still be closed to vehicular traffic on game days from Potomac Avenue to T Street. Future retail will be added on the east side of 1st Street south of S Street. Along the south side of the stadium, an additional 3,000 SF of retail will be included on the southeast corner of the building which also houses the team offices. The lack of retail and the alignment of 1st Street were some of the concerns neighboring developers had with the previous design, which they thought hampered access to their proposed projects and took away from the potential activation of Buzzard Point. We’ll see if the retail space at the soccer stadium gets filled any faster than the space at Nationals Park, where the 1st Street, SE side of the stadium remains empty eight years after the stadium opened.

Besides adding more retail, the revised plan also includes changes to the public plaza, reducing the amount of hard surface and adding landscaping and terraces. The terraced green space will allow for a variety of events on non-game days, such as movie screenings and live performances. Adding green space was one of the requests of the ANC, since the grassy lot (Parcel B) to the east of the stadium is only temporary and will be replaced with a building once a developer is selected for that parcel. The large D.C. United sign in the plaza that was in the previous design was moved closer to the ticket window and the water feature was removed. Also, the entry point at the corner of 2nd and T streets was removed and replaced with a new entrance at 1st and S streets. This entrance was moved to align one of the stadium entrances with S Street, one of the major corridors envisioned in the Buzzard Point Framework Plan. Below are additional renderings of the revised plans.

Renderings courtesy of D.C. United
Posted by SWill at 8:38 AM