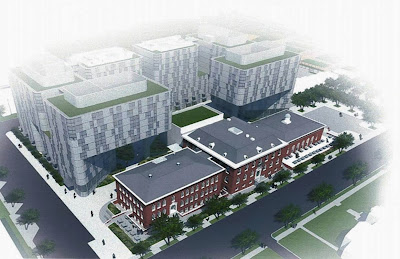 There was a feature in Washingtonian about the Mera and Donald Rubell, who own the Capitol Skyline Hotel and have teamed up with Telesis to redevelop the former Randall School at First and Half streets into a modern art museum, restaurant, and 500+ multifamily rental apartments in two high-rise buildings. The revised project was approved back in 2014, but nothing has happened at the site. Earlier this year, it was announced at a community meeting that the development team added Lowe Enterprises to the project. In the Washingtonian article, it states “after years of delays, the couple is poised to break ground.” Unfortunately, the project architect Bing Thom (who also designed the remodeled Arena Stage) won’t be able to see the project to fruition since he passed away this week.

I would really love to see some activity on the two vacant lots at 4th and M... I feel like they will ultimately define Waterfront Station.

I wish the Rubells would also focus on improving the exterior of the Capitol Skyline hotel. At least they finally replaced the windows -- that's a good start -- but that building is in desperate need of a good power wash and/or paint job. The new bright white windows just make the dinginess of the building's exterior even more noticeable. It could be such a cool building with a little more TLC.