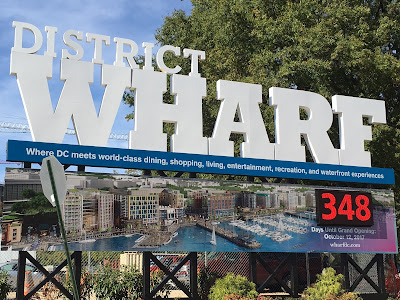 The countdown is on for the grand opening of the first phase of development at District Wharf (formerly known as The Wharf). A new clock was installed along Maine Avenue, counting down the days until October 12, 2017. While 525 Water and St. Augustine’s church are both complete, the bulk of construction for phase one won’t be complete until next fall. The massive parking garage which will span most of the development will open in the middle of 2017. Many of the buildings have already “topped-off”, but progress seems to be furthest along on the apartments at 750 Maine Avenue and VIO condos. Meanwhile, 1000 Maine Avenue is finally starting to come out of the ground. A law firm may be one of the office tenants in either 1000 Maine or 800 Maine, which would be a significant milestone for the project and the Southwest Waterfront neighborhood since the majority of office tenants that have traditionally called Southwest home are government agencies or contractors. Following are a few progress photos taken from East Potomac Park.