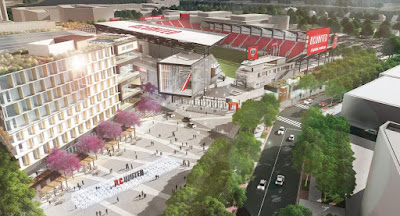 A campaign effort is now underway by a group of developers to force D.C. United to improve their stadium design ahead of next month’s Zoning Commission hearing. Now that D.C. United has control of the stadium footprint, zoning approval is the next step needed before construction can begin. The Washington Post reports that Akridge, Western Development, Capital City Real Estate, and Steuart Investment Company have lobbied city officials and the team to make improvements to the design, claiming there was a “bait and switch” from the preliminary design to their current plans. I received a flier about the stadium design in my mailbox earlier this week, which at first I thought was made by a neighbor, but it turns out it was from the PR team hired by the developers, which own property near the stadium site. Akridge owns seven acres south of the stadium (two additional acres were taken by eminent domain to create the stadium site). They also own the former Coast Guard headquarters building with Western and other developers where they plan to redevelop into a mixed use development called Riverpoint. Capital City Real Estate owns land next to the Riverpoint project and plan to start construction next year on a condominium project called Peninsula 88. Meanwhile, Steuart Investment Company owns several lots to the east of the stadium site, although no development plans have been announced yet for those sites.


Some of their issues include the lack of retail along the perimeter of the stadium (except for a team store), no on-site parking, minimal vehicular access on 1st Street, and noise. As noted in the article, Akridge and Western have made an offer on the adjacent parcel to the east of the stadium, where they intend to build a residential building with ground floor retail. In addition, they have hired an architect to reconfigure the stadium design to allow for additional retail and have offered to purchase that space carved out of the ground floor. D.C. United made some changes to their original PUD in response to concerns from the Zoning Commission, including reintroducing 1st Street on the east side of the stadium site and activating the large plaza along Potomac Avenue. However, the team doesn’t seem too keen on the additional changes proposed by the neighboring developers. From the article:

[D.C. United owner Jason] Levien questioned the motivations of his opponents, saying Akridge and Miller were threatening to hold the stadium hostage in order to pressure the team into selling its retail space to them. “I would encourage you to ask Akridge why they are so interested now in this project when they’ve had that land for years and haven’t built anything,” Levien said.

The dispute threatens to delay the stadium project, which was scheduled to start construction in early 2017 and open sometime during the 2018 season. The Zoning Commission will meet on November 2, but before that, ANC 6D meets on Monday at 7pm where they will vote on whether to support the stadium project. It should be an interesting couple of weeks of stadium drama…

Renderings courtesy of D.C. United
Posted by SWill at 4:44 PM