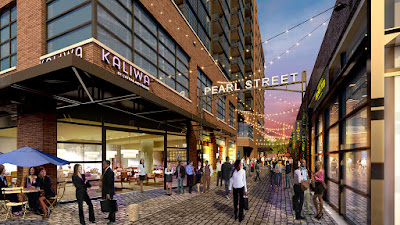 The Wharf continues to roll out its restaurant and entertainment lineup for the first phase of development which is scheduled to open starting in October 2017. Four new establishments have been announced:


These are in addition to the other restaurants and retailers announced in recent months. So far, there are 16 confirmed retail tenants. Needless to say, these new dining options will vastly change the restaurant scene in Southwest!

Rendering courtesy of The Wharf
Posted by SWill at 6:52 AM

"Ethnic cuisine"? Does that include white people's food?