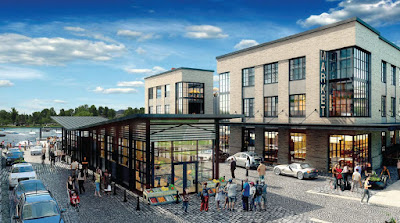 Back in 2015, a PUD filed for Parcel 1 and the area in and around the Municipal Fish Market mentioned space for a market hall with an “Italian butcher/deli and large market hall/restaurant.” Now we know who will operate the market hall space. It was announced that Nick Stefanelli, which opened Masseria at Union Market in NE last year, will operate the Italian market at The Wharf. The planned three-story building along Maine Avenue will contain nearly 12,000 SF of space, as well as a 5,600 SF private roof deck. In addition to the roof deck, the concept includes an artisanal Italian Market with a salumeria, cheese cave, and butcher shop, among other things, and a trattoria on the second floor with an exclusive 12-seat table in the wine cellar.

Stefanelli's market hall is scheduled to open by the spring of 2018, a few months after the first phase of The Wharf is expected to deliver.

Renderings courtesy of Hoffman-Madison Waterfront
Posted by SWill at 11:15 PM

I expect they'll be complaining about the smell from the fish market next door.

Good point. Will be interesting to see what becomes of the less than stellar seafood merchants. It sucks that they are playing hardball. I'd imagine the Wharf developers have even offered to fix up their digs. And I really do like the idea of an open-air FRESH seafood market along the water (I wouldn't eat that crap there now to save my life!). And who are any of us to stop one of the longest operating fish markets in the US?

If they don't want to play nice though and adopt to the change and scale of the new development - I hope they are ousted and replaced with newer better seafood (especially crab) vendors! Imagine crabs like the ones at the Bethesda Crab House at the Wharf!