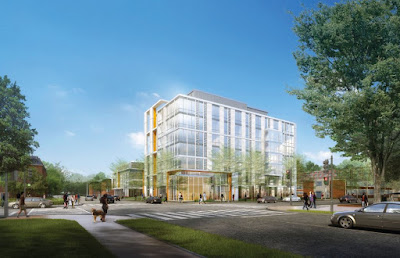 An amendment was filed last week to the Planned Unit Development (PUD) application for The Bard, a planned development at 501 I Street by Shakespeare Theatre Company (STC) and Erkiletian. These amendments are the result of meetings with the community and the ANC to discuss community benefits. These new benefits are in addition to those previously included in the PUD. Below is a summary of the additional benefits proffered by the development team:
Whether these proposed additions will be sufficient to the vocal opposition to this project remains to be seen. The Office of Planning has recommended that a set-down hearing not be scheduled for the project since the proposal is inconsistent with the Comprehensive Plan or the Southwest Neighborhood Plan. Those plans call for institutional uses or moderate density, but the proposed mixed use building would vary in height between four and seven stories, which is inconsistent with moderate density.