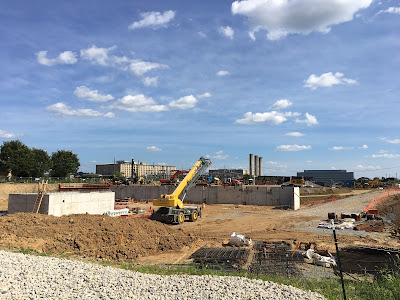 A stroll down 2nd Street in Buzzard Point reveals a much changed landscape. In two years, there will be a new Pepco Waterfront substation and a D.C. United soccer stadium, but for now, the area is a large construction zone. Hardly any buildings exist from Q Street to T Street, save for the historic Dent house at the corner of 2nd and R streets, which is owned by Pepco and will be preserved while they build their new substation. The Pepco substation construction is further along – digging has reached 15 feet below grade and excavation is complete with the foundation being poured (see above photo). Construction should be complete by June 2017.

Meanwhile, demolition of existing structures at the D.C. United stadium site is complete and utility work is about to begin. The District is responsible for horizontal development, so the District’s portion of the process will be complete this fall.  A demolition ceremony was held in April when Mayor Bowser helped take down a metal-clad building at 2nd and S streets. Once utility work is complete and D.C. United finishes the PUD process for the design of the stadium, the team will be responsible for building the stadium, along with implementing the environmental remediation plan the District devised. The latest estimate of when construction could begin is the end of 2016 with the stadium opening in 2018.

Both projects are happening simultaneously, so the two are coordinating a traffic control plan with phased street closures as delivery trucks haul away dirt and bring in concrete. There will be an enforced work zone around Buzzard Point with a 15 MPH speed limit in the area; cameras will be set up by MPD; and no construction trucks will be allowed in the residential neighborhood north of Q Street. The traffic consultant from Dewberry presented phase one of the Traffic Control Plan at Monday’s ANC meeting, which involves street closures at Potomac Avenue, Half Street, and R Street.
Posted by SWill at 10:32 PM

When are the residents of James Creek and that other place
going to be gentrified? They need to go.