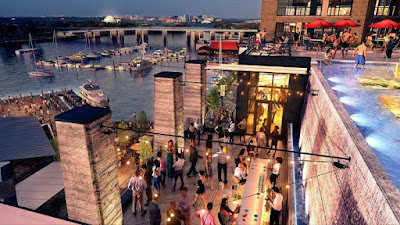 A few more retailers have been announced for the first phase of The Wharf. According to the Washington Business Journal, Social Restaurant Group plans to open a French-Mediterranean restaurant called La Vie. From the rendering, it appears that La Vie will be located in Parcel 2, which includes Wharf Hall and an apartment building. La Vie will be a 9,800 SF restaurant with a 1,100 SF waterfront terrace and will have access to a 5,000 SF rooftop terrace. Social Restaurant Group operates other establishments across the city, including Provision 14, The Prospect, and Bonfire.

In addition to La Vie, a lease has been signed with District Hardware and Bike, which would be the first hardware store (and bike shop) in Southwest. From the WBJ:

The Foggy Bottom mainstay will open its second location at The Wharf, with a 6,300-square foot store. In addition to the hardware offerings and the bike shop, the Southwest location will also sell water sports equipment and feature a café in conjunction with local coffee roaster Vigilante Coffee.

At this month’s ANC 6D meeting, it was announced that Cordial Craft Wine, Beer & Spirits was applying for a liquor license at The Wharf on the future Pearl Street, an interior street between Maine Avenue and Wharf Street. The shop has an outpost at Union Market in NE and will be opening a 525 SF space at The Wharf. The commissioners decided to protest the license application because not enough information was known about the shop. According to the ABRA application, Cordial Craft Wine, Beer & Spirits will be:

A 9,000 SF CVS is also planned – likely to be along Maine Avenue, which was where neighborhood-serving retail was supposed to be placed. Several other tenants were announced back in March, but the new batch are the first non-restaurant retailers to sign at The Wharf.

In other Wharf news, Globest.com states that a lease has been signed with MakeOffices, a collaborative office space provider for 45,000 SF at 800 Maine Avenue. The office building is one of two that will be built during the first phase of development at the Wharf.

Rendering courtesy of Hoffman-Madison Waterfront
Posted by SWill at 11:19 PM

Let me preface my comment by saying - I almost didn't want to type it, because I don't want to seem like I'm complaining. I'm happy with every restaurant announcement, the quality of materials being used, and the focus on open, community spaces. This is really going to be something MORE special than I think people realize.

Buttttttttt - in an area SOO starved for retail, it seems CRAZY to start doubling stores. Another CVS!?!? Wow. Not even a Walgreens? Bummer...

Also, it would have been nice to have the hardware store as a part of Waterfront Station - which was supposed to be the civic core of SW. I wonder who/what will take the soon to be finished and still vacant retail bays on 4th St? Hopefully nothing as weak as Enterprise - while the Wharf gets all the good stuff...

Hi SWag,
I hear what you're saying but hopefully can make you a convert because we're super, super excited to be coming to SW. When my family and I were considering locations we looked all over DC for spaces that would allow us to expand our existing setup while also adding the cafe to really make us a community staple. Not to over-hype but the Wharf team worked very closely with us to bring District Hardware and Bike into the development. The parking, bike infrastructure, public space and the people (neighborhood, visitors and future co-tenants) really won us over. I literally drive down Maine Ave every week to see how things are progressing.

We really want to hear from our future neighbors too. We want to make sure that beyond the standard hardware items we're bringing in inventory that the surrounding area wants and needs. Is that lots of plants? Kitchen supplies? Shoot us an email and let us know!

Thanks for your post, Jarrett! Look forward to welcoming you to the neighborhood.

Ridiculous that the anc protested the liquor store. What else is there to know about it? The closest legit spot is all the way in Navy Yard right now

@Jarrett - no need to convert me. I'm sure I'll be a regular, I freaking love being handy. It's just that those of us who have been around since the old days were promised that Waterfront Station/4th St would be the core for things like groceries, cleaners, hardware store, etc. and that the Wharf would be more of an entertainment district with SOME neighborhood servicing retail along Maine. That doesn't seem to be panning out.

What's worse is we've waited for over 6 years for the 1100/1101 bays in Waterfront Station to be leased, obviously to no avail. Wt*?!? You're telling me not a single store wants to open on the same block as a Metro, two (soon to be more) fully leased office buildings and a bunch of apartments? That's crazy. I wish you guys would have taken one of the Waterfront Station spots, but I'm certainly not complaining about walking two more blocks. I'm happy to have you guys - period. Welcome

There is also a CVS on C St SW (a few blocks away) so technically we are tripling up.

You're telling me not a single store wants to open on the same block as a Metro, two (soon to be more) fully leased office buildings and a bunch of apartments?

@SWag - I don't have the answer to that except to say that both CVS and Safeway have contracted Security Guards on the premises, as well as security guards on the streets. That could possibly be a turn-off for potential retailers.

@Wizzyliz - I doubt it. That seems standard for city grocers. There is a guard at the Whole Foods by GW and a few at the Walgreen's in Chinatown...

I agree with SWag that I'd hoped for more/better retail options to be added to Waterfront Station, because the location is more central for the neighborhood. Having said that, I'm happy to know that we're getting a hardware store. Finally! Thank goodness.

The developers/managers of Waterfront Station must not be very good at pursuing and recruiting retail because again I agree with SWag that it doesn't seem to make much sense that such a convenient location surrounded by residential developments would continue to be so devoid of retail options. It's confusing and disappointing.

ANOTHER CVS?! Good grief. Delighted with was of the hardware store/bike shop. DC HD and Lowes make us shudder. Hubs currently drives to the Ace Hardware in Logan Circle. Hoping the liquor store comes through. Hubs drives to union market for them, too. We're really looking forward to NOT driving, but waking half a block to CVS really isn't a problem. Again, good grief.

Also, I think 4th st will be more of a core with that diner Constantine committed to open with PN Hoffman. I haven't been to the Diner since Adams Morgan was my old stomping grounds, four years ago, and I remember how much that place added to the neighborhood when it first opened.

It's all about the management: Waterfront Station has absentee landlords, who are mostly interested in collecting rent on the offices. The Wharf has a local owner who really cares about retail.

District Hardware's location (thanks, Jarrett!) is more about the best place for a bike shop. The Wharf is right along the Anacostia River Trail, plus there will be a ferry from Hains Point, perhaps the most popular spot for the local roadie crowd. Plus, their coffee/beer plans won't have to compete with Tryst 4.0.

Also disappointed that it's CVS and not Walgreen's or Rite Aid, just for variety's sake. This also probably rules out any potential TargetExpress, since those have CVS pharmacies inside.