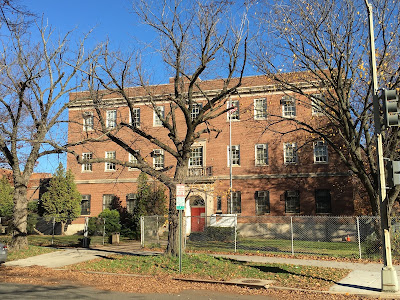 The DC Council voted today to move the proposed Ward 6 shelter site from a parcel adjacent to Blind Whino to the Unity Health Clinic site at 850 Delaware Avenue. The change was prompted by broad opposition by community members of the Blind Whino site, especially by residents of neighboring Capitol Park IV.  Since the site was privately owned, it would have required the District government to lease the shelter building, raising the cost. During the Council review of Mayor Bowser's Homeward DC plan to close DC General by creating homeless shelters in all eight Wards, all of the proposed privately-owned sites, including Ward 6, were changed to District-owned parcels. For a time, the proposed Ward 6 shelter was not going to be in Southwest at all - a site was identified at 200 K Street NW, but ultimately due to legal issues with that site, the Unity site was selected.

According to a statement by Ward 6 Council Member Charles Allen's office, Unity Health Clinic will be rebuilt as part of the deal:

The 850 Delaware Avenue, SW site was identified early on by the Southwest community as a possible alternative to the initial proposal at 700 Delaware Avenue, SW. In addition, this location has more favorable zoning and is large enough to accommodate up to 50 units of housing. Further, after constructive conversations with the Mayor and her team, the city has committed to replacing and rebuilding the community health center located at that site, and has also committed to protecting and preserving critical Greenleaf public housing through a Build First model of redevelopment as prioritized by the Southwest community.

An initiative by the CBCC several months ago called for the Unity site to be used as a seniors' housing/health complex as a first step in redeveloping Greenleaf under a Build First model. As a result of the Council's actions, a new District or Federally-owned parcel in Southwest will need to be used to implement Build First at Greenleaf.
Posted by SWill at 7:23 PM

So the residents of SW get a new homeless shelter, a rebuilt clinic - and Greenleaf is sticking around a lot longer as they wait for new housing to be built elsewhere. I see...

I imagine that will further delay any planned development along I St. SW

What BS. Nothing but concentration of poverty east of 4th street.