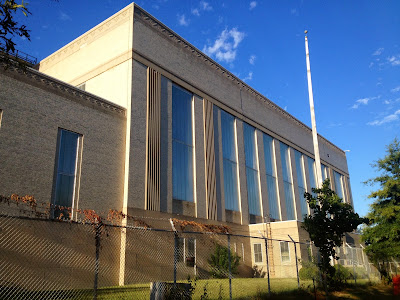 An application was filed by the DC Preservation League to give historic designation to the decommissioned Buzzard Point Power Plant, an art moderne structure built in 1933 at Half and V streets. The old water intake plant (now the Matthew Henson Conservation Corps building) is also included in the designation application. SWNA submitted an historic designation application for the power plant in 2013, but decided to withdraw it. Ideas for repurposing the power plant building have included an art gallery a la Tate Modern in London or an entertainment facility like Power Plant Live! in Baltimore.

Interest in Buzzard Point has increased significantly over the past few months once it was certain a new stadium would be built there for D.C. United and the Office of Planning released their Buzzard Point Vision Framework Plan. Recent announcements include:


In addition, Pepco is building a new substation just north of the stadium footprint at 2nd and R streets. Many of these sites were mentioned as potential development opportunities in a post I wrote back in 2013. We’ll see if any others on the 2013 list will come to fruition soon…
Posted by SWill at 7:34 AM