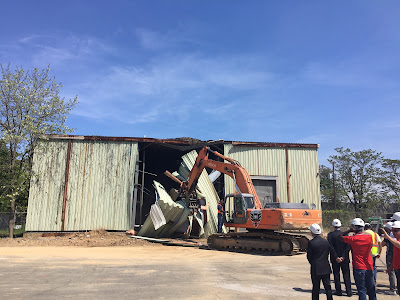 An official demolition ceremony was held this morning at the site of the future D.C. United Stadium in Buzzard Point. Speakers at the event included Mayor Muriel Bowser, DC Council Chair Phil Mendelson, Ward 6 Council Member Charles Allen, D.C. United owner Jason Levien and others. Deputy Mayor for Planning and Economic Development Brian Kenner stated during his remarks that the stadium project will provide 1,000 construction and permanent jobs, as well as help generate $1 billion in economic activity once Buzzard Point reaches buildout. It’s anticipated that approximately 1 million visitors will come to the stadium per year once it is built – construction will get underway this fall with completion by the start of the 2018 MLS season. This summer, a Community Workforce Coordinator will be hired to help connect Ward 6 residents to construction jobs at this project. Later, a Hospitality and Pre-Apprenticeship Coordinators will also be hired.


The District is responsible for horizontal development of the site, including razing existing buildings, utility work, and environmental remediation while D.C. United will build the stadium. There were a few protesters outside of the demolition event, many in face masks, with signs – one sign said “Protect out health, our children, our lives from contamination.” The Buzzard Point area is heavily polluted due to its primarily industrial past. The stadium, along with construction from the new Waterfront Pepco substation directly north of the stadium site, the new Frederick Douglass Memorial Bridge, and other sites in Buzzard Point which may be developed in the near future, will require extensive remediation and may cause a lot of dust to form in the neighborhood. In fact, there was what appeared to be an air quality control machine at the event.

After the speeches, the Mayor donned a hard hat and started demolishing a metal-clad building at 2nd and S streets. Below is a video of Mayor Bowser doing some demo work. Levien and Allen also got their turn at the helm. 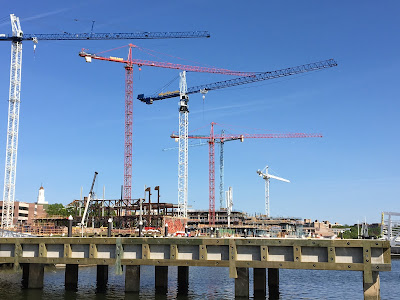 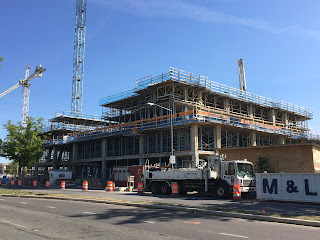 It was announced in Globest.com that Hoffman Madison Waterfront received construction financing for the dual Canopy by Hilton/Hyatt House hotel project on Parcel 5 adjacent to 7th Street Park.

Starting next month, 7th Street at Maine Avenue will be closed to vehicular traffic so work can get started at 7th Street Park. Also in May, traffic will reopen on Water Street and M Place around the new 525 Water condo building and St. Augustine’s Church, the former of which looks almost complete. 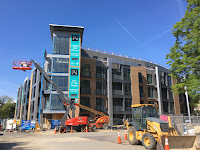 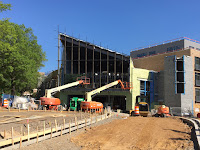 Utility work continues at the new Waterfront Park adjacent to 525 Water condos. Construction on the park is expected to be complete late this year. 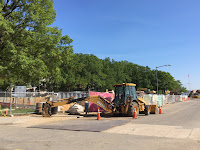 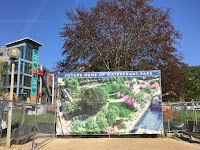 Work on extending the commercial Pier 4 continues. Look here for more information on what’s planned at the new Pier 4. A pair of construction cameras have been set up so you can keep track of what’s going on at The Wharf. 525 Water/St. Augustine's should open in 2016 while the rest of phase one should be complete by the fall of 2017.
Posted by SWill at 11:51 PM No comments:

SWBID to Move to New Digs

SWBID will soon be moving from their temporary quarters at Arena Stage to the ground floor of Patriots Plaza on 4th Street, across the street from the CFL. The BID has begun ramping up operations since it was formed last year. One of the most visible signs has been the "Clean Team", which can be seen sprucing up the area. Also, new outdoor furniture was installed in the SW lot of Waterfront Station at 4th and M streets, where AYA Markets will return later this spring for their weekly Saturday morning farmers market. The monthly Market SW night market will also be back on the fourth Friday of each month starting on May 27 through October 28. Vendors who are interested in participating can find an application here. Another activation space within the BID will be located at Maryland Avenue and 7th Street, where food trucks gather during lunchtime to feed the thousands of Federal employees who work in the area.
Posted by SWill at 3:41 PM No comments: 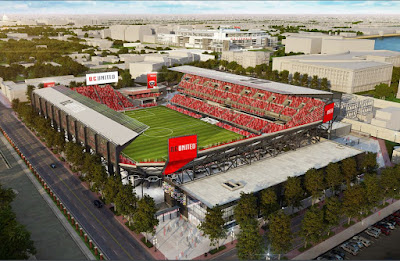 A demolition ceremony to make way for the new (tentatively named) D.C. United Stadium will be held on Monday, starting at 11am. Mayor Muriel Bowser, D.C. United representatives, and other dignitaries will be on hand for the demolition ceremony, to be held at 2nd and S streets in the stadium footprint. The District took ownership of the land for the stadium last year and is still dealing with eminent domain proceedings for a two-acre portion that was owned by Akridge. A PUD for the 20,000-seat stadium designed by Populous was filed in January and is making its way through the approvals process with the Zoning Commission.

At a Zoning Commission pubic meeting last month, the stadium design was described as “boring”, “austere” and “prison-like” by the Commissioners, so expect some revised drawings in the coming weeks. Once approvals have been secured and environmental remediation is complete, construction is expected to start around September with the stadium opening in time for the start of the 2018 MLS season in March.

Rendering courtesy of D.C. United
Posted by SWill at 8:23 AM No comments: 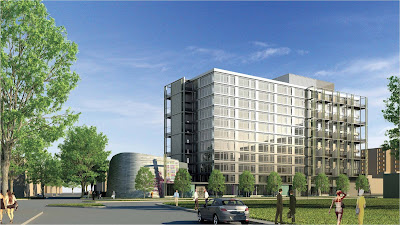 Construction equipment has finally arrived on site at Delaware Avenue and M Street, which will be transformed into a new sanctuary for St. Matthew’s Lutheran Church and a 221-unit apartment building. The sanctuary will be at the corner of Delaware Avenue and M Street and the 11-story apartment building will run along M Street. Chain link fencing has been up around the site for years, but in the past few days, a construction trailer arrived along with backhoes, and Delaware Avenue was closed on Monday as construction crews started digging in the street. Parking restrictions on both sides of Delaware Avenue are expected for the next two months as utility work is done for the project, but restrictions on the west side of the street will last longer since it will take about two years to finish construction. 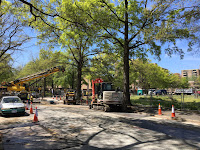 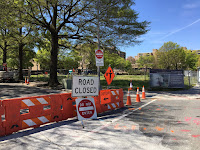 The St. Matthew’s project is a long time coming – the PUD was approved in November 2012 and a two-year extension was requested in late 2014. This is the second rental apartment building to start construction over the past couple of months in the quadrant. Construction began last month at 301 M Street, located cattycorner from the St. Matthew’s site. Within the next few months, two more apartment buildings will get underway. Construction on two new rental apartment buildings on the parking lots of the View at Waterfront apartments on 6th and M streets and 6th and K streets should get started this summer (a new name for this project will be announced soon).

Rendering courtesy of Shalom Baranes Associates
Posted by SWill at 8:31 AM No comments: 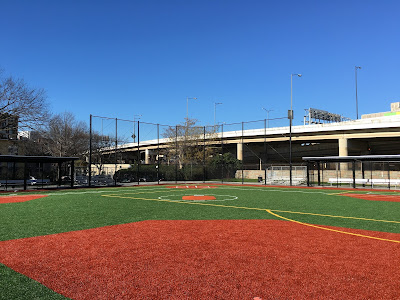 The new multipurpose turf field at Randall Recreation Center has a new name which may sound familiar to Nationals fans…the Ryan Zimmerman Field will officially open this Saturday with a ribbon cutting at 10am. The festivities begin at 8:30am with “fun and games” and concludes with an inaugural baseball game at 10:30am. Guests will include the aforementioned Zimmerman, Nationals manager Dusty Baker, Mayor Muriel Bowser, Ward 6 Council member Charles Allen, ANC 6D commissioners, and other dignitaries. All are welcome to attend. The field was redone this past fall and winter by a partnership between DPR/DGS, the Nationals Dream Foundation, the Cal Ripken ?Sr. Foundation, and Under Armour, which includes baseball and soccer fields. 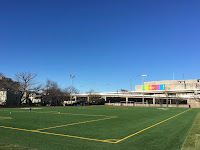 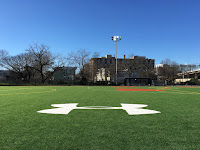 Over 1,800 Mixed Income Units Could be Built at Greenleaf 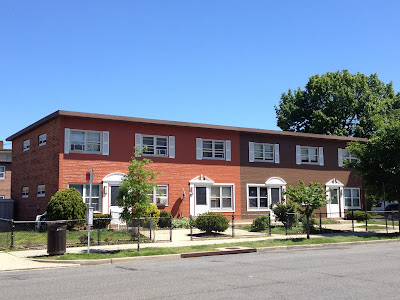 At last Saturday’s second Greenleaf community meeting, consultants from HR&A Advisors revealed a potential redevelopment plan for Greenleaf, which calls for a phased redevelopment of the 15-acre public housing complex. The plan would rebuild the 493 units of public housing that currently exist at Greenleaf as well as another 1,374 units of market-rate housing, in a mix of 1-, 2-, 3-bedroom and townhome units. Since many of the existing Greenleaf units are townhomes, a portion of the replacement Greenleaf units will also be townhomes.

There were six main design ideas that were followed by the consultants and planners from Perkins Eastman: 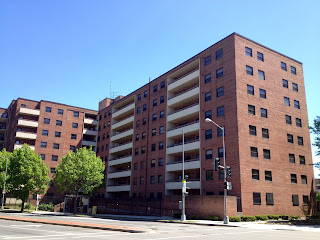 The preferred redevelopment option would be to build the first phase outside the Greenleaf footprint, but in the vicinity, so Greenleaf residents won’t need to leave the community. A “Build First” model is something many in the community have advocated for and has the support of the ANC and the DC Council. Several District and federally-owned sites were identified as possible locations for building the initial phase of 127 units under the “Build First” model. This would allow the redevelopment of the block of 38 townhomes between L and M streets to proceed without displacing residents because the families in the townhome units can be moved to the new off-site building. 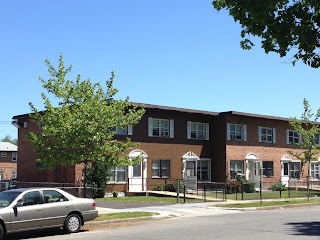 The initial phase inside the Greenleaf boundaries would be a high-rise building on the north side of M Street with 271 units for seniors, with the potential for ground floor retail. Once that building is complete, the current seniors building on the south side of M would be replaced with another high-rise with 662 units of mixed income housing, including flats and townhomes on the first two levels. Phase three on-site includes 240 units – townhomes where the Greenleaf mid-rise building is now and a high-rise on the north end of the block between L and M streets. After that phase is complete, a mix of 336 mid-rise and townhome units can be built on the block between K and L streets. Development would conclude with more mid-rise and townhome units (336 units) on the northernmost block between I and K streets.

This is just a preliminary plan and could change before the final plan is released this summer. A third community meeting will be held in May where the plan will be fleshed out further. Construction is still several years away, but having a framework will allow the Housing Authority to seek a developer partner to help bring the vision of a mixed income Greenleaf to reality.

The redevelopment plan for Greenleaf sounds very similar to one posted three years ago today on this blog...the only difference is the current plan is NOT A JOKE. The Housing Authority could have hired me to write the plan! :-)
Posted by SWill at 12:49 AM 4 comments: