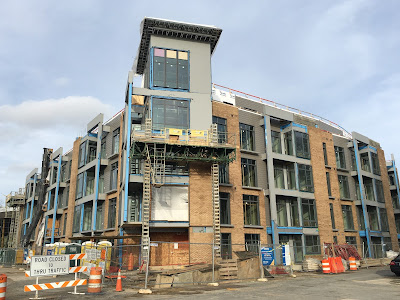 Construction of 525 Water Street condos at The Wharf is progressing, with most of the exterior now covered in brick. By spring, the condos will be ready for occupancy. This will be the first new building to be complete in The Wharf and the first new construction condos to be built in Southwest since Potomac Place Condos were finished in 2005 (Waterfront Tower was a condo conversion). VIO, the other new condo building planned during the first phase of The Wharf, is also under construction and is scheduled to be completed in 2017. 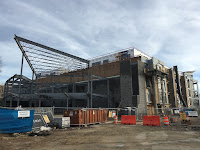 Meanwhile, the steel frame of the new St. Augustine’s Episcopal Church continues to rise along Maine Avenue. At the new St. Augustine’s, there will be views of the church from M Street and Maine Avenue since it will be located at a prominent corner. There will be a soft curved edge in front of St. Augustine's to complement the curvature of Arena Stage across the street. The two-story church will be approximately 15,000 square feet with the sanctuary located on the second floor offering views toward the Washington Monument. Also on the second floor will be classrooms and a library. On the ground floor, the entrance will lead to a vestibule that connects to classrooms and an all-purpose room, which will be available for community events, similar to how the former St. Augustine's building was used for meetings. The church began construction last May and is scheduled to be completed later this year. 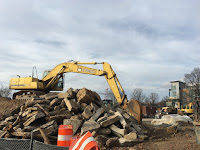 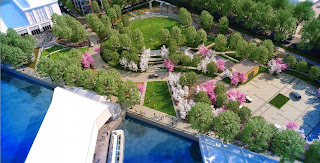 Waterfront Park, the 3.5-acre green space to be located behind parcel 11, began construction in the fall, but completion is still several months away. Park elements include plantings, pergolas, a water feature, play mounds, pathways, seating areas, an access road for the Harbor Patrol, and a plaza. The plaza will be named after DC Delegate Eleanor Holmes Norton - the section of the park between the access road and the Wharf promenade.

Renderings courtesy of MTFA Architecture and Hoffman-Madison Waterfront
Posted by SWill at 2:38 PM

Does anyone know when is the waterfront park scheduled to be completed?
Also, any idea when the next batch of 525 water side street condos will go on Sale?