Developers Behind The Bard Intend to File PUD Application 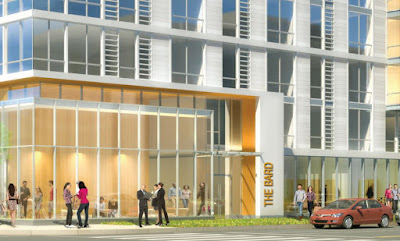 The development team behind The Bard, a mixed-use arts/residential project planned for the former Southeastern University campus site at 501 I Street, will be submitting a Planned Unit Development (PUD) application within the next month and has sent notice to surrounding neighbors. The Bard, as planned would include a costume design shop, administrative, educational, and rehearsal space for Shakespeare Theatre Company (STC), with actor and fellow housing and market-rate apartments to be developed above STC's operations by Erkiletian. A description of the previous plan can be found here. Southeastern University was demolished last summer and the site cleared in anticipation for development.

Some neighbors of 501 I Street have mobilized their efforts to try and stop the development, which would replace a two-story building under R-3 zoning with a much denser project (under SP-2 zoning) and has the potential to block sunlight to surrounding residential properties and Amidon-Bowen Elementary School. Yard signs can be found along 6th Street deriding the project and a blog has been developed in opposition to The Bard. Earlier this week, several neighbors signed a letter sent to the attorneys representing the development team asking for a delay in submitting the PUD application.

A series of meetings will be held in February to reveal revised plans for the project to the community, which includes the following: the reduction in size by two stories to a maximum height of seven stories; a reconfigured unit mix to include more larger units and less studio apartments; reducing the number of planned units from 177 to 136 units; and moving some of the massing from the south side of the project northward along 6th Street. The two meetings will be held on February 1 and February 16 at Blind Whino Arts Club, located at 700 Delaware Avenue (the former Friendship Baptist Church) on the second floor. Both meetings will be from 6:30 to 8:30pm.

Rendering courtesy of The Bard
Posted by SWill at 6:12 PM

If every possible option was on the table...what if DC did a land swap with the developer and give them the duck pond plot? The building on the other side of the road would align height with the Waterfront development and Waterside Towers.

The duck pond is in need of major repairs, etc. The pond/park could be relocated next to the school and townhouses. It could be rebuilt with all of the proper lighting, filtering, etc. and maybe tie in some unique features that tie in the SW arts community.

I am not a politician and I have zero knowledge of zoning. :) I just wanted to toss out an idea I had.

That's not a bad idea at all! I wonder how feasible this is and how much it would delay construction. I'm sure they would have to change zoning documents and adjust all designs, but how long would this take?

Great idea that is worth bringing up!

Great idea from Michael. Love when people offer reasonable and creative alternatives rather than just saying "no" to things.

Either way, looking forward to The Bard's future presence and our increasing property values in an improving neighborhood.