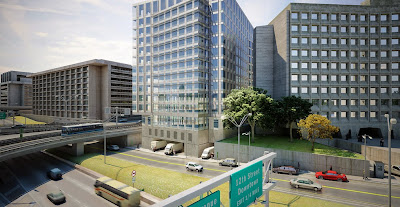 Construction began about a year ago on 500 L’Enfant Plaza, a “trophy” class office building developed by The JBG Companies. The building began construction on spec, or without an anchor tenant. However, after building the foundation and loading dock, it appears construction has been stopped for the past couple of months. Has the project been placed on hold until an anchor tenant has been found? 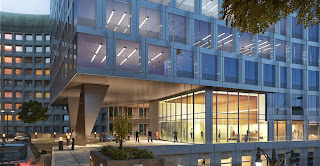 In addition to 500 L’Enfant Plaza, an office building recently delivered at National Square (500 D Street) and remains empty. Other office buildings under construction in the quadrant include 800 and 1000 Maine Avenue at The Wharf. Only one of those buildings has a tenant signed up, so there is plenty of competition in the market.

Renderings courtesy of The JBG Companies
Posted by SWill at 5:03 PM

I wrote them a while ago and they responded that they were on hold until a tenant is found. Disappointing.

Just got an email from STC. Meeting at Blind Whino Feb 1 6:30-8:30 about their SW project, which they call The Bard. Again on Feb 16, same details.