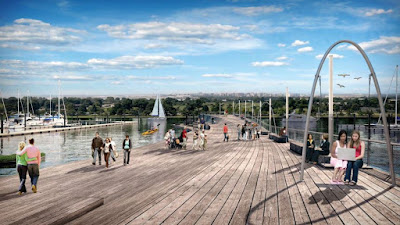 Hoffman-Madison Waterfront has submitted an application for Stage II PUD approval of 7th Street Recreational Pier, which was originally proposed to be built in Phase III of The Wharf, but may now be developed during the initial phase, in concert with construction of 7th Street Park. The pier will be located at the terminus of 7th Street, adjacent to the planned 7th Street Park and is one of the four public piers planned for The Wharf. 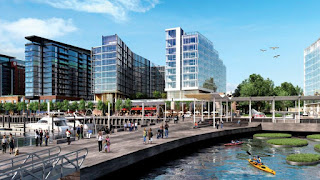 7th Street Recreational Pier has been designed by Michael Vergason Landscape Architects and Moffatt & Nichol, according to the Zoning Commission application as “a narrow quay for enjoying views of the water and the monuments, and will have a lower floating pier that can accommodate various rental activities and other water-based recreational program.” On the upper portion of the pier, wooden benches, oversized swings, lighting, and a “fire feature” are planned. As designed, the pier will gradually descend towards the water’s surface before rising to its terminus, 432 feet into the Washington Channel. A series of floating wetlands will be located to the east of the pier, providing visual interest and environmental benefits. A large shade structure is planned for the area where the pier, wharf promenade and 7th Street Park meet, which will include a gathering area and retail kiosk. 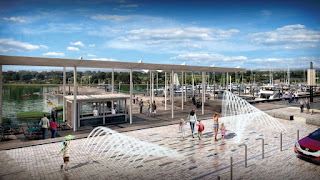 In order to build the pier during Phase I of construction, a revised transition plan needed to be developed, specifically for the live-aboards at Gangplank Marina. The revised plan moves access to Gangplank Marina away from the construction zone of the pier and moves the live-aboards to a centralized location. ANC 6D will need to give its support before the pier design is taken up by the Zoning Commission. The U.S. Commission of Fine Arts approved the concept design back in July.

Renderings courtesy of Hoffman-Madison Waterfront
Posted by SWill at 6:28 PM

Email ThisBlogThis!Share to TwitterShare to FacebookShare to Pinterest
Labels: 7th Street, The Wharf

sounds amazing. cant wait for these wonders to start delivering!!