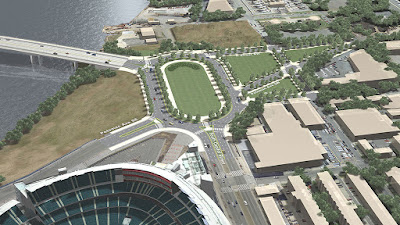 In addition to a new substation, Pepco is planning to place its name on a few other pieces of real estate in Buzzard Point. According to the Washington Business Journal, the utility company paid the District $25 million in a sponsorship deal which would allow the following in Buzzard Point, among other neighborhoods across the city:


The DC Council authorized DPR to allow corporate sponsorship of its facilities when it passed its 2012 budget. Then-council member Muriel Bowser sponsored the original legislation. According to DCist:

Buried in the 209-page-long Budget Support Act, the provision would allow the D.C. Department of Parks and Recreation to "contract for, pursuant to all applicable contracting and procurement guidelines, advertisements and sponsorship for recreation centers, fields, pools, and play courts within the Department's inventory."…The provision would also allow for the establishment of "friends groups" -- organizations of residents willing to help maintain their local parks and recreation centers, be it by maintaining them or raising funds to help improve them. Additionally, fees gathered from developers seeking exemptions from zoning laws will go towards parks and recreation centers located in the ANC where the development is to take place.

In Southwest, “friends groups” have been created for multiple DPR facilities, including the SW Duck Pond and the 3rd and I Streets Park, and one may be formed for Randall Recreation Center. Meanwhile, Under Armour will have its logo on the new turf field it’s helping to finance at Randall Field, which is currently under construction.

Most of the $25 million contributed by Pepco has already been used by the District government to place in escrow, covering the cost of acquiring Akridge’s two-acre parcel in the planned soccer stadium footprint through eminent domain. According to the Bowser administration, the Pepco sponsorship deal is separate from negotiations to support the Pepco-Exelon merger, but yesterday at a press conference in Buzzard Point by environmentalists and good government groups, they claim the two are related and are calling for an ethics investigation, as reported in The Washington Post.

Renderings courtesy of DDOT and DGS
Posted by SWill at 7:42 PM