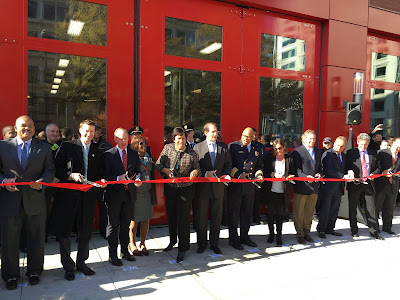 District officials, FEMS, E Street Development Group, and members of the community gathered at 400 E Street to celebrate the opening of a mixed-use development, including a new Engine 13 firehouse, Hyatt Place hotel, KidPower headquarters, and ground floor retail. Back in the summer, I got a tour of the project while it was still under construction. FEMS will be moving to the new firehouse sometime over the next month or so, while Hyatt Place is already accepting guests.

The project started construction a little less than two years ago; however, it has been planned for several years. In fact, my very first post on this blog in 2008 had to do with DMPED’s solicitation of development proposals for 400 E Street and a nearby parcel at 6th and E streets. The developers will start designing the second phase of development starting in 2016, with construction likely beginning in 2017.

Below are some photos from the ribbon-cutting.

Here are a few interior photos of the firehouse:

This looks great!! Thanks for sharing! Was there any sign of who was going to be occupying the retail space?

I've heard they are looking for a market or cafe concept to come to that corner space.

Pret a Manger would be perfect for that location.

Maybe I'm late to the party (and didn't read about this earlier) but would the fire engines leaving the fire station have their sirens on and would that cause some annoyance for the hotels guests?

one would assume that the fire engines wont turn their sirens on until they are out of the building. Once they are out on the street how would they be any different from any other sirens (police, ambulance) on the street that are part of being in a city?

New traffic signals have been installed near the firehouse so the sirens won't be going off until the fire truck is at least a block away from the firehouse/hotel.

Pret would be perfect

3 votes for Pret! :) I just contacted them on their corporate website.I will say on weekdays the Atrium Café on School Street SW makes fantastic sandwiches with fresh sliced ham, turkey and roast beef. Maybe everyone knows this but if you haven't checked it out you should! It's a great alternative to Subway.

Will the old (current?) fire station in Federal Center SW be redeveloped once the new station is occupied?

@Michael - there are a few other sandwich spot gems in SW, but they all close around 3 or 4 pm and as you mentioned are closed on weekends. Hopefully this place, whatever it is, has longer hours.

The current plan for 555 E Street includes multi family, retail, and a hotel component, with construction expected to begin in 2017.

You are so right. I forgot all about that.

Dream stores for the Wharf: