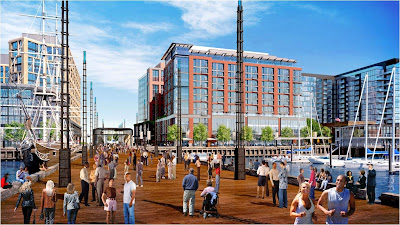 This week brought news that a restaurateur will bring two or three new restaurants to The Wharf, but another operator has chosen to not move forward with plans for one there. The WBJ reported earlier this week that in addition to opening an Asian restaurant serving Filipino cuisine, Cathal Armstrong has a letter of intent to open a distillery and was in discussions to operate a rooftop lounge at the InterContinental Hotel. Although the article didn’t say where the distillery would be located, one is planned at the Municipal Fish Market. The Filipino restaurant and distillery would open in 2018 while the lounge would open by 2017.

Meanwhile, the WBJ reported later in the week that chef Robert Weidmaier of RW Restaurant Group decided against opening a restaurant at The Wharf. From the article:

“The RW Restaurant Group made the decision to no longer open a new establishment at The Wharf in 2017 based on the competitive restaurant climate in D.C.,” said [RW Restaurant Group COO Frank] Schull. “Our decision was fully understood and we left on amicable terms.”

In other Wharf news, the first phase of development was financed with $400 million in construction financing and $145 million in TIF/PILOT bonds, according to a press release. 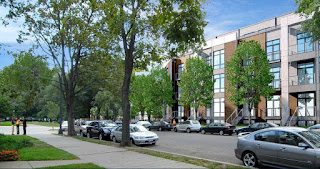 Sales began at 525 Water Street condos last month where 30 units were released for sale with prices ranging from the $400s for 1BR units to the $900s for 2BR/Den units. Condo sales at VIO began over the summer – all 25 units in the initial release have been reserved. The next release at VIO won’t occur until sometime in 2016. The sales center for both condo buildings is located at the former Channel Inn at 690 Water Street.

Renderings courtesy of Hoffman-Madison Waterfront
Posted by SWill at 8:13 AM

Email ThisBlogThis!Share to TwitterShare to FacebookShare to Pinterest
Labels: The Wharf, Water Street

Any rumors of possible new grocery stores as part of the new development? Eager to have another option in the neighborhood besides our poorly stocked Safeway, which since it opened has seemed to be more form (shiny new building) over function (much wasted space in the front of the store relegating the main grocery sections to a limited area and lack of selection). Except for when I need only a few basic items, I still typically drive to other grocery stores that are bigger (Harris Teeter at Navy Yard or Pentagon Row) or otherwise have better selection (Trader Joe's in Alexandria or Whole Foods in Clarendon) than our Safeway. I had hopes that we'd get a Whole Foods or Trader Joe's in our neighborhood, but with plans for a new WF in the Navy Yard area and the recent announcement that TJ's is going to open on Capitol Hill near Eastern Market, I'm guessing either of those might not be an option. A Giant would be welcome, though, if it's as big and nice as the one in Columbia Heights. That's one that we don't have on this side of town, and they often have good prices.

I agree 100%. I would prefer another anchor replace Safeway at that location. It is the absolute worst grocery story chain! I wish Wegmans would consider SW/Waterfront for one of their city markets which they are trying out in Boston. Their prices are #1 along with customer service! Plus they make a majority of their items in house.

Parcel 4 of the Wharf (currently under construction) will have a grocery store on the Maine Ave side of the development (between 7th and 9th Streets). No announcement as to an operator, although the news of TJs coming to Eastern Market does make me curious which grocer it will ultimately be. Guess we'll see...

I wouldn't mind Safeway so much (the operative word is "SO") if they would allow more than two registers open at a time. And sure the selection has much to be desired and the layout ... OMG ... the bread line is like hitting a brick wall literally - who thought of that? But if you're new here you would be thankful that the old Safeway was torn down. Now that was not so much of a store as it was a hell(o)hole.

Let's hope its anything but Safeway! :) I really wish we could get Safeway to hear their customers/neighbors. I also wish we could get a coffee shop in one of the open spaces. That Starbucks inside Safeway is nothing like any other Starbucks I have been to - quality, customer service, etc.

When PN Hoffman hosted a community update for us last year they said a small grocer would open shop, something along the line of My Organic Market, and definitely not another large chain like TJ. I'll be happy enough with Whole Foods opening walking distance on New Jersey Ave NE.