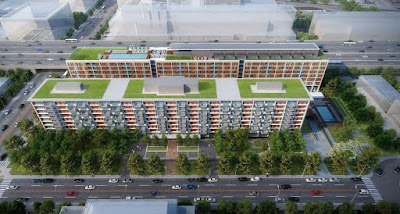 Since its last meeting with the Historic Preservation Review Board over the summer, the developers of the Capitol Park Tower addition at 4th and G streets have come up with a revised plan. At the July 30 HPRB meeting, the Board stated the following about the proposed addition:

The Board found that a new building addition in the proposed location could be compatible, but that revisions were needed to achieve compatibility with the site and existing building. Among its comments, the Board found that the pool pavilion should be retained, the end wings of the new construction should be eliminated, the design and materials of the new building should be restudied, the landscape plan should continue to be refined to closely follow Kiley’s design, the perimeter fence should ideally be eliminated or relocated and simplified, and that any enclosure of the ground level should be with much greater setbacks of the glazing. 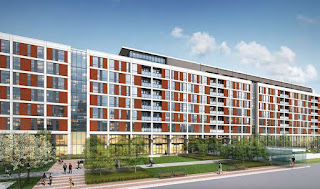 Perseus Realty and UIP took to heart the recommendations of the HPRB and made the following changes after meeting with the Capitol Park Tower tenant association and the ANC:


Below are some additional renderings, designed by WDG Architecture:

The developers will present their revised plans to the HPRB tomorrow afternoon at 1pm.

Renderings courtesy of Perseus Realty
Posted by SWill at 11:57 PM

I love the new design and the end cap with the terra cotta orange looks great! I appreciate some of the new developments paying homage to the mid-century modern architecture including the PN Hoffman plans on 4th Street. SW DC should be a great place for architects with an MCM background to be involved with!

And people wonder why housing is so expensive... these revisions magically happen when some arbitrary board with no business acumen provides nitpicky feedback. Do architects/buidling designers work for free? No, no they don't.

Why is the board's business acumen the point? The board doesn't exist to make a profit. It exists to review historic buildings to ensure preservation, right? Nobody works for free, but the building was probably acquired with the knowledge of how these things tend to work in DC and in SW in particular. Nothing new. In addition, the developer will make money off of the new building once it begins renting out those apartments via its (or its partner's) realty arm. Do you honestly believe that the community should just accept the developer's first renderings to save the developer the money it costs to develop a new building design? Much of the community would be OK if you didn't add a thing to that existing building!

Does anyone have any updates on this project?

This project is supposed to be discussed today at the Historic Preservation Review Board. I'll be writing an updated post about this project soon.