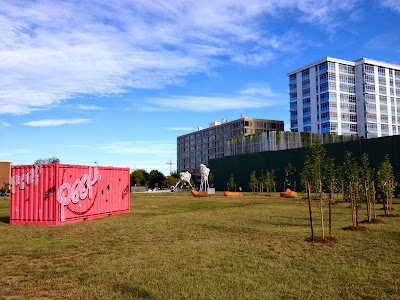 A community meeting is scheduled for September 10 to hear proposals from the short-listed development teams for the District-owned NE parcel at Waterfront Station, located adjacent to CVS. Last fall, the grass lot was transformed into Nonuments Park, an art exhibit which was part of The 5x5 Project. Remnants of the Alpha Lillstrom Sculpture Garden are all that remains, as well as a brick walkway the District installed last year to replace the dirt pathway used as a shortcut through the lot.

Six development teams responded to the RFP back in April and DMPED eliminated three of them. The teams presenting on the 10th include:
Each team will get 15 minutes to present their vision for the parcel, which has stage one PUD approval for a 400,000 SF mixed income residential building with ground floor community-serving retail or municipal services. The presentations will be followed by a Q & A session. The meeting will be held at 1101 4th Street, second floor from 6:30 – 8pm.

DMPED will select the winning development team sometime this fall based on ANC and community input. Once the team is selected, it will take several months to get stage two PUD approval and DC Council approval to do the land transfer. Based on that timeline, my guestimate on a plausible construction start date for this project would be sometime in 2018.
Posted by SWill at 6:14 AM

I love having the open space there. It makes SW so green, open, and different from the rest of DC. Has the time already passed for DC residents to lodge their opinions about keeping the space as a park?

That grass is historic. It's been there for three years now and it's part of the SW identity. Build nothing. Ever. In fact, for every blade of grass on that historic lot (where that fugly but historic mall used to be), the city should deduct and an inch off the elevation of all surrounding buildings.