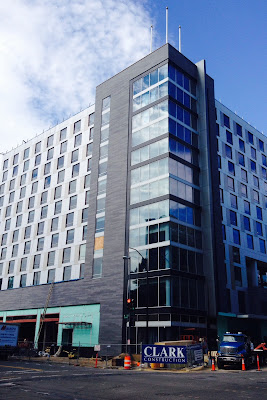 In about three months, the newest Hyatt Place in DC will be opening at 400 E Street, a mixed-use project developed by E Street Development Group and designed by WDG. I was able to get a hard hat tour of the project from Stacy Smith and Carl Barnett from Hyatt Place last week. This project has a special place in my heart since it was the subject of my very first blog post back on June 4, 2008. Hyatt Place Washington DC/National Mall is a 214-key select-service hotel. Service is key at Hyatt Place, which offers “casual hospitality in a smartly designed, high-tech and modern environment.” All Hyatt Place hotels have free Wi-fi and breakfast is included, as well as 24/7 access to freshly-prepared food at the Gallery Market (for a fee). The same person who checks in a guest is also capable of preparing a meal, making an espresso or a cocktail.

The main entrance to the Hyatt Place Washington DC/National Mall is located on E Street, where elevators take guests to the lobby lounge on the third floor. At the lobby lounge, guests can check-in; use free computers and printers at the e-Room; pick up a sandwich from the Grab n’ Go case; eat at the Gallery Market (non-hotel guests can also order and pick-up food any time of day or night); get a drink at the Bakery Café, which serves Starbucks by day and wine, draft beer and spirits in the evening; work out at the 24-hour StayFit Gym which faces an outdoor pool; and socialize outdoors on the Gallery Terrace.  There are also five meeting rooms with over 3,000 SF of flexible event space on the second floor. The fourth floor contains back-of-house operations for the hotel and administrative offices for KidPower, a local non-profit organization.


Reservations are already being accepted for stays at Hyatt Place Washington DC/National Mall beginning in February 2016, but once an exact opening date is announced for the hotel, reservations will open up for dates closer to opening. Rates start at $159, but Southwest residents will receive a 20% discount on the best available rate and holiday specials will be available. In addition, job postings will soon go up for the hotel.

400 E Street is a true mixed-use building, which in addition to Hyatt Place will also include 1,400 SF of ground floor retail at the corner of 4th and E streets and a firehouse along 4th Street. The retail space is envisioned as a market or deli and the firehouse is the first newly built facility for DCFD in nearly 30 years. When a call comes in and a fire truck leaves its bay, the traffic signals will synchronize, allowing the fire truck to leave the station without the need to blare its horn, which hotel guests will surely appreciate! In addition, the windows are triple-paned to keep out any noise from the Southwest freeway next door.


Prior to becoming a hotel/firehouse, 400 E Street was a District-owned lot used as parking and at one time was a gas station. E Street Development Group was awarded the rights to develop 400 E Street and a second parcel at the existing Engine 13 site at 555 E Street back in 2009 by DMPED through a 99-year ground lease. Back then, 400 E Street was planned as an office building with a firehouse below, but due to unfavorable office market conditions, the use changed to a hotel. Construction began on phase one in December 2013. A second phase is planned for 555 E Street. An office building with ground floor retail was originally planned, but according to DMPED’s new Project Pipeline Database, the current plan for the site calls for a 193,000 SF multifamily building, an 89,000 SF hotel, and 15,000 SF of retail space. Construction on the second phase is expected to start in 2017.
Posted by SWill at 8:28 AM

It's interesting that 555 E is changing from office to residential/hotel. I think the latter is a much better fit. That area desperately needs life. I hope the cafe/market stays open after 5pm.

400 C St is really in the way of that area also. I'd love to see that building demolished!!