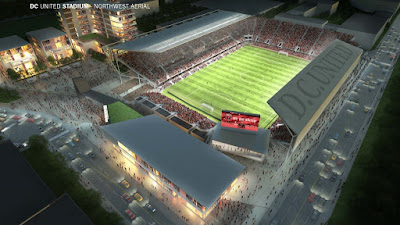 Populous was selected by DC United in late July to design their new 20,000+-seat stadium on Buzzard Point according to an article in Capital Business. This is the same firm that designed Nationals Park and was used to provide preliminary designs of the proposed soccer stadium, which will be located at 2nd and R streets, across the street from Pepco’s new substation. From a press release:

The new stadium will create a unique atmosphere to watch the game. It will be both intimate and intimidating, putting fans close to the action and creating a home field advantage. An interactive plaza will link to ancillary development that functions as a gathering place for fans and the community 365 days a year. The stadium will also be eco-friendly and provide connectivity to public transit, including the Metro, Bike Share and [the DC Circulator]. 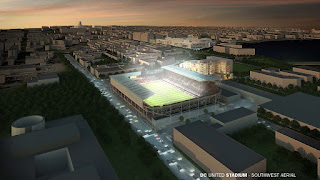 The city and the team finalized an agreement in June which calls for the city to gain control of the land for the stadium by the end of September. A 2-acre portion owned by Akridge is still not under the city’s control, although it has the authority to use eminent domain if an agreement isn’t reached with the developer by the September 30 deadline. The new DC United stadium is expected to start construction in 2016 and open in time for the 2018 MLS season.

Renderings courtesy of Populous
Posted by SWill at 11:23 PM