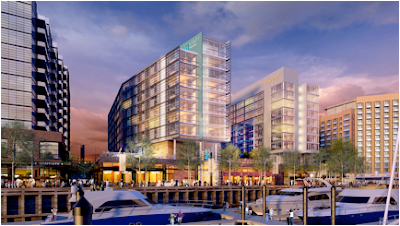 It was announced today that Canopy by Hilton and Hyatt House will be the hotel brands opening at Parcel 5 of The Wharf. Parcel 5 is located at Maine Avenue and 7th Street, between 7th Street Park and VIO. During the PUD process when JBG owned Parcel 5, it was mentioned that Element and Aloft would be the hotel brands coming to the site, but the parcel was sold to Hoffman – Madison Waterfront earlier this year and apparently the plans changed. From the press release:

The combined hotels will include café/bar and other dining options; a 1,100-square-foot fitness center; 2,500 square feet of meeting room space; a courtyard with outdoor terraces and water features; an outdoor pool; and a rooftop bar with Washington Channel views. The penthouse will include an additional 10,000 square feet lounge area with sweeping views of the Potomac.

Canopy is a new hotel concept developed by Hilton in 2014, a lifestyle hotel brand. Here is a description of the new concept, according to the Canopy website:

Canopy by Hilton is the energizing, new hotel in the neighborhood offering simple guest-directed service, thoughtful local choices, and surprisingly comfortable spaces, so guests simply feel better going forward. Each property is designed as a natural extension of its neighborhood, with local design, food and drink, and delivers a fresh approach to hospitality and the guest experience.

The Wharf location will have 175 keys and will be one of the first to open in the world. Canopy will be located closest to 7th Street Park.

Hyatt House is an extended-stay hotel brand launched in 2012 that has more than 60 locations in the US – three in the Washington metro area. The Wharf location will have 238 keys and will be the first Hyatt House to open in the District. These two hotels will join the InterContinental Hotel in the first phase of development at The Wharf and all three hotels will be open by the end of 2017.

A fourth hotel is currently under construction in Southwest – Hyatt Place Washington DC/US Capitol at 4th and E streets, which is further along than The Wharf and is scheduled to open this November. I took a hard hat tour of Hyatt Place yesterday, so be on the lookout soon for a post on this project.

Rendering courtesy of Hoffman-Madison Waterfront
Posted by SWill at 4:25 PM

Any word on retail that's being recruited to the new development? I hope there's some effort to recruit a Trader Joe's to the area. There's no doubt it would be super successful, and it would be such a boon to the neighborhood. I assume Whole Foods isn't an option since they already have plans to open near the Navy Yard development. And we still don't have a good grocery store in the neighborhood. The new Safeway that opened a couple of years ago is majorly lacking in options due to so much wasted space and poor inventory. I regularly choose to drive to other grocery stores rather than walk to Safeway, despite it being only 3 blocks from me.

No official retail announcements have been made yet, although some of the celebrity chefs potentially coming to the development were reported on a few months ago. From what I've heard, at least 12 retail leases have been signed so far. It seems that news about The Wharf is being released every couple weeks, so I imagine we'll know more about some of the retailers soon.

This was a bit disappointing to me personally as a Starwood fan -- but Hyatt House will certainly do for my visiting relatives, and I'm excited to see what Canopy is like.

Safeway's been changing over the past few months; after the Cerberus buyout, management of the DC-area stores shifted from the Bay Area to Philadelphia (it's now under Acme supermarkets). Personally, I don't like it, but it is different.