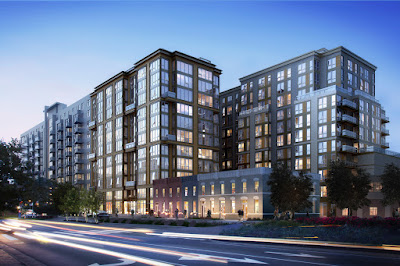 Six parcels along South Capitol Street totaling 31,000 SF next to Camden South Capitol apartments recently sold for $11 million to Ronald D. Paul Cos. as reported by the Washington Business Journal. These are the same lots where Altus Realty Partners plans to build 1319 South Capitol, a 230,000 SF rental apartment building across the street from Nationals Park. Altus will JV with Ronald D. Paul Cos. on the $80 million development, which will include inclusionary zoning units and some ground floor retail. 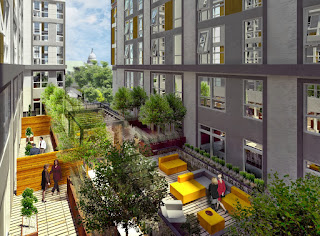 The developer came before ANC 6D back in March to give an update on the project. At that meeting, it was mentioned that the PGN Architects-designed residential building will be in a “L” shape that wraps around six existing rowhomes on South Capitol Street which are more than 100 years old. Newer renderings have fleshed out how the project will look compared to what was presented back in the March meeting.

According to Globest.com, the approximately 250-unit building is scheduled to be completed in 2018, which puts its construction start date sometime in 2016. Although the development team plans to build the project by-right, Altus will need to get ANC support for an alley closing and needs approval from the Zoning Commission since 1319 South Capitol is within the Capitol Gateway Overlay.

Renderings courtesy of PGN Architects
Posted by SWill at 6:15 PM