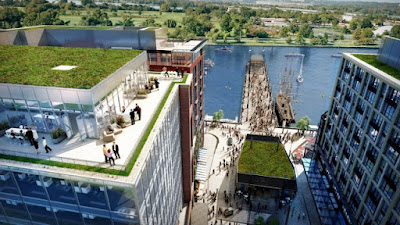 Yesterday was the "bottoming out" ceremony for the first phase of The Wharf, which means excavation at the massive site has been completed. The project began construction back in March of 2014 and the first phase is scheduled to deliver in the fall of 2017. On the same day as the ceremony, it was announced that the first office tenant for 800 Maine Avenue has been secured.

According to a press release, the tenant will be the American Psychiatric Association (APA) which is moving back to DC from Rosslyn with more than 200 employees. The APA will occupy 63,000 SF of space, or three floors of the planned 11-story, 220,000 SF building. 800 Maine Avenue (formally known as Parcel 3A) will be located adjacent to District Pier at the gateway to The Wharf and will have private rooftop terraces. It's also next to the planned Intercontinental Hotel.

Will,
Any updates about the construction of the new Southwest Waterfront Park?

525 Water St. SW: Alteration and repair to a vacant parcel at The Wharf, to include the construction of 13 retaining walls, a new park pavilion with a water feature and accessory uses. The park site is among the southern anchors for the Hoffman-Madison Waterfront project. It will be located adjacent to a 108-unit condo building at 600 M St. SW, the first residential project slated to deliver at The Wharf.

I was going to answer this question with a blog post later tonight, but SWag beat me to it! I'll post it anyway...