Phase 1B of The Wharf Before CFA 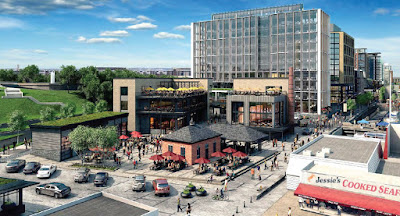 Last month, the Hoffman-Madison Waterfront team presented plans for Phase 1B of The Wharf, which includes Parcel 1 and the Municipal Fish Market to the U.S. Commission of Fine Arts. Parcel 1 is planned as a 10-story office building with about 234,000 SF of space and an additional 14,000 SF of ground floor retail. It will be located to the west of Parcel 2, which will contain Wharf Hall with apartments above. 1000 Maine Avenue, designed by Kohn Pedersen Fox Architects will include a three-level atrium and a rooftop terrace. 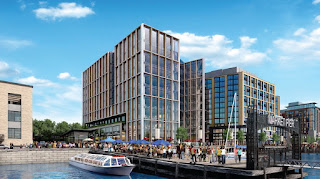 The CFA reviewed and approved the concept design of the 1000 Maine Avenue office building, but they did offer some minimal criticism in their June 26 letter to the Hoffman-Madison Waterfront team:

"The Commission members commended the project team for the sophisticated concept design, noting particularly the elegance of the proposed curtainwall system with terra-cotta components. For the development of the design, they suggested further study of the proportions of the multi-story curtainwall frame on the north elevation, specifically at the recess above the retail floors, and they agreed that the primary Maine Avenue entrance to the office building would benefit from further development." 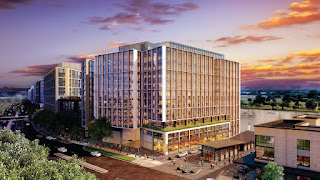 Although the Municipal Fish Market is not technically a part of The Wharf, the development team holds a lease on the market and has proposed improvements in order to integrate it into the overall experience along the Southwest Waterfront. Legislation was passed by Congress to allow the sale of items other than seafood at the Municipal Fish Market, which will allow the development team to expand the offerings at the market. According to the CFA submission package:

“The Fish Market will be a place to eat; to shop; to be entertained or to people watch; to do something or be part of something – an experience one can only find at this particular place.” 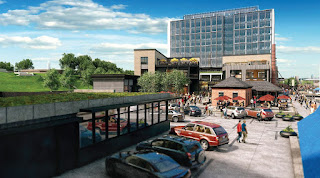 The main elements of the plan for the Municipal Fish Market include Market Plaza, an area with temporary retail space and will incorporate historic buildings along with new construction; Market Square, where a market shed is planned; and the Fish Market Promenade, which will connect to the existing fish market with piers and outdoor seating. McGraw Bagnoli Architects designed the buildings and Landscape Architecture Bureau designed the public spaces. 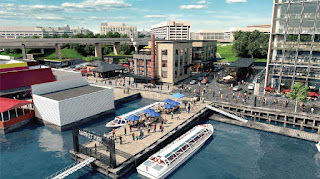 A total of six buildings are planned: Building A is the historic lunch room and oyster shed, which will contain 1,300 SF of retail space on a single floor with an oyster bar and 700 SF of outdoor patio space. The building fronts the Market Plaza and Fish Market Promenade.


Building B is a rum distillery – a 5,550 SF, four-story building with a tasting room and retail store, as well as 1,500 SF of outdoor space, including a roof deck. It will be located to the east of Building A along the promenade.

Building C will be a market shed, a single story building with 1,350 SF of space for a café, flower stand and temporary retail such as a farmers market and craft market, as well as an additional 1,300 SF of outdoor space. It will be located adjacent to Parcel 1 on the east side of the market.

Building E will contain market pavilions along Maine Avenue. The pavilions will contain 1,000 SF of space in one-story buildings with 600 SF of outdoor space with a coffee and sandwich shop.

Building F is the operations building, which will contain 1,100 SF of retail, 2,650 SF of operations space (including a fish cleaning room, dumpster, and maintenance facility) and 1,400 SF of outdoor space.

In its June 26 letter, the CFA stated their general support for the redevelopment of the fish market and the desire to maintain its eclectic nature, but expressed some concern about the design, particularly of the new buildings:

"They cautioned against trying to recreate this random, energetic character in the architecture of the new buildings, which will inevitably result in a falseness made obvious by the authenticity of the existing context. In particular, they raised concerns about the diminutive scale and multiple elements of the two proposed buildings, recommending instead that these be developed with a more neutral expression as a background or frame for the historic pavilions and the existing fish vendor barges; the retail tenants themselves may provide the lively character of the marketplace."

Renderings courtesy of Hoffman-Madison Waterfront and the U.S. Commission of Fine Arts

Update: Fish market tenants filing suit against Hoffman-Madison Waterfront and DC per City Paper.
Posted by SWill at 8:57 AM

Email ThisBlogThis!Share to TwitterShare to FacebookShare to Pinterest
Labels: Maine Avenue, The Wharf

who didn't see this coming...