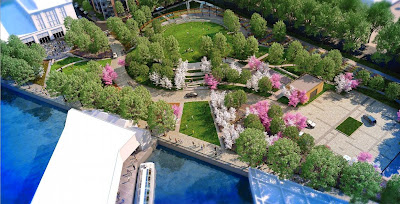 A building permit was approved for the 3.5-acre Waterfront Park at The Wharf according to the Washington Business Journal. The park will be located to the south of the condo/church buildings under construction in the southeastern portion of The Wharf and was designed through a community charrette process. Even before official construction begins at the park, a copper beech tree has already been planted in the future park. The tree was moved there last October from the grounds of St. Augustine's Church to make way for demolition. Other park elements include plantings, pergolas, a water feature, play mounds, pathways, seating areas, an access road for the Harbor Patrol, and a plaza. The plaza will be named after DC Delegate Eleanor Holmes Norton - the section of the park between the access road and the Wharf promenade.

Construction on Waterfront Park should begin later this year and should last about 11 months, with delivery scheduled sometime in 2016 after the new church/condo buildings are complete.

Rendering courtesy of Hoffman-Madison Waterfront
Posted by SWill at 11:16 PM

Email ThisBlogThis!Share to TwitterShare to FacebookShare to Pinterest
Labels: The Wharf, Waterfront Park

I dislike this park. Why is it centered around a circle? There are no natural circles in the land that this plays well with. The existing park works better, more along the lines of the grassy steppes in the Yards park along the riverfront there. This, too, should play off the shape of the water line and its edge rather than trying to force a grass circle of limited utility there. If it is going to have to be a circle raised up like that, they should just turn it into a bandstand for outdoor performers in the summertime. That would be a much better idea!

Just to be clear, this park is not replacing the linear park. This will be in addition to it. Although hopefully something more active and green will replace that park (the linear one). It's really an awesome space that is horribly underutilized.

But I agree, I don't get the circle. Yards Park seems to be a much better design. It just flows into the river.

On another note - I really wish Ft. McNair would let the River Walk Trail continue through their gorgeous, well manicured, historic property - all the way to BuzzPo. It makes no sense to take the trail down P St. Build a fence that only allows pedestrians on the small trail, that looks to be there now, along the waters edge - all the way to BuzzPo.

Waterfront Park will be located mostly where the cruise ship parking lot is now. The linear park is National Park Service land. It's doubtful any changes will be coming to that sliver of land anytime soon...

As far as the circular-look goes, the park was originally designed to look like a fan with a semicircular section where the pergolas will be located, but that section must have been altered during the approvals process to become more circular.

The circle has terraces that slope down towards the water. There's a very slight grade change on that site, where the east edge (and particularly the northeast corner) is a few feet above the water's edge, and the landscape architects wanted to maximize the views from that corner. One natural shape for a "hill" is a circle, and so we have a circle.

Some of the neighbors at Tiber were adamant about not having any organized activities, like vending, in the park.

Fort McNair is a gated community for very good reason: almost everyone on the Joint Chiefs of Staff lives along Generals' Row.

Good point about Ft. McNair. Still, I'd like to see them figure it out. I think it's important if SW is going to be a TRUE waterfront community. Perhaps close the path at night like the Navy does. People can walk up to the White House gate, which is about equidistant to the respective houses. I'm sure Ft. McNair can manage...

Love the green over what is now road and parking lot. It looks like they're framing water views between buildings