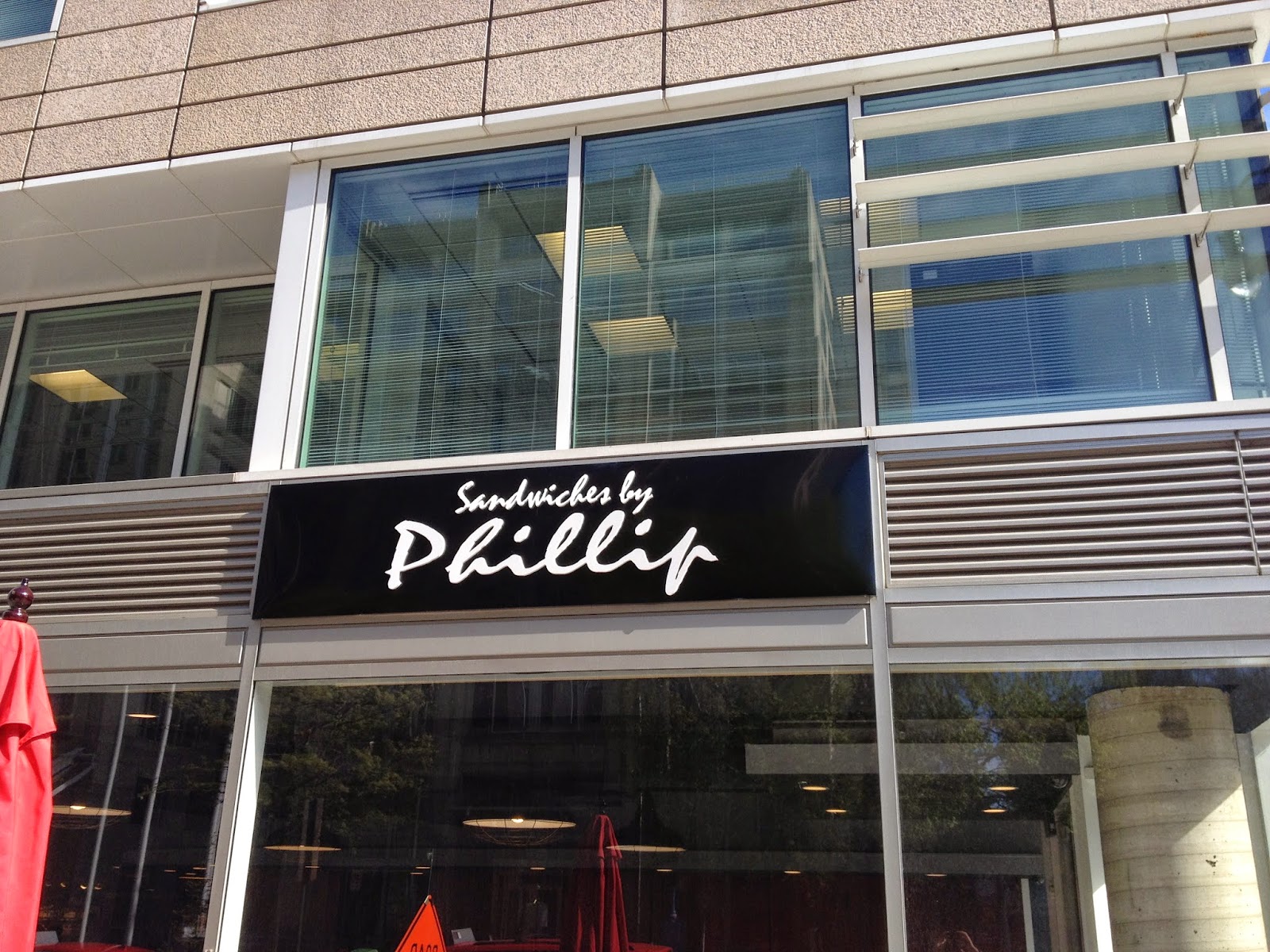 Over the weekend, storefront signage was changed at the corner of 3rd and E streets for Café Phillips deli, which is now known as Sandwiches by Phillip. Three of the five former Café Phillips locations across the city have made the switch to Sandwiches by Phillip. The 3rd and E Street location opened in June 2011 on the ground floor of the Capitol View office building. The other retailer in the building is Pizza Autentica, which also opened in 2011. 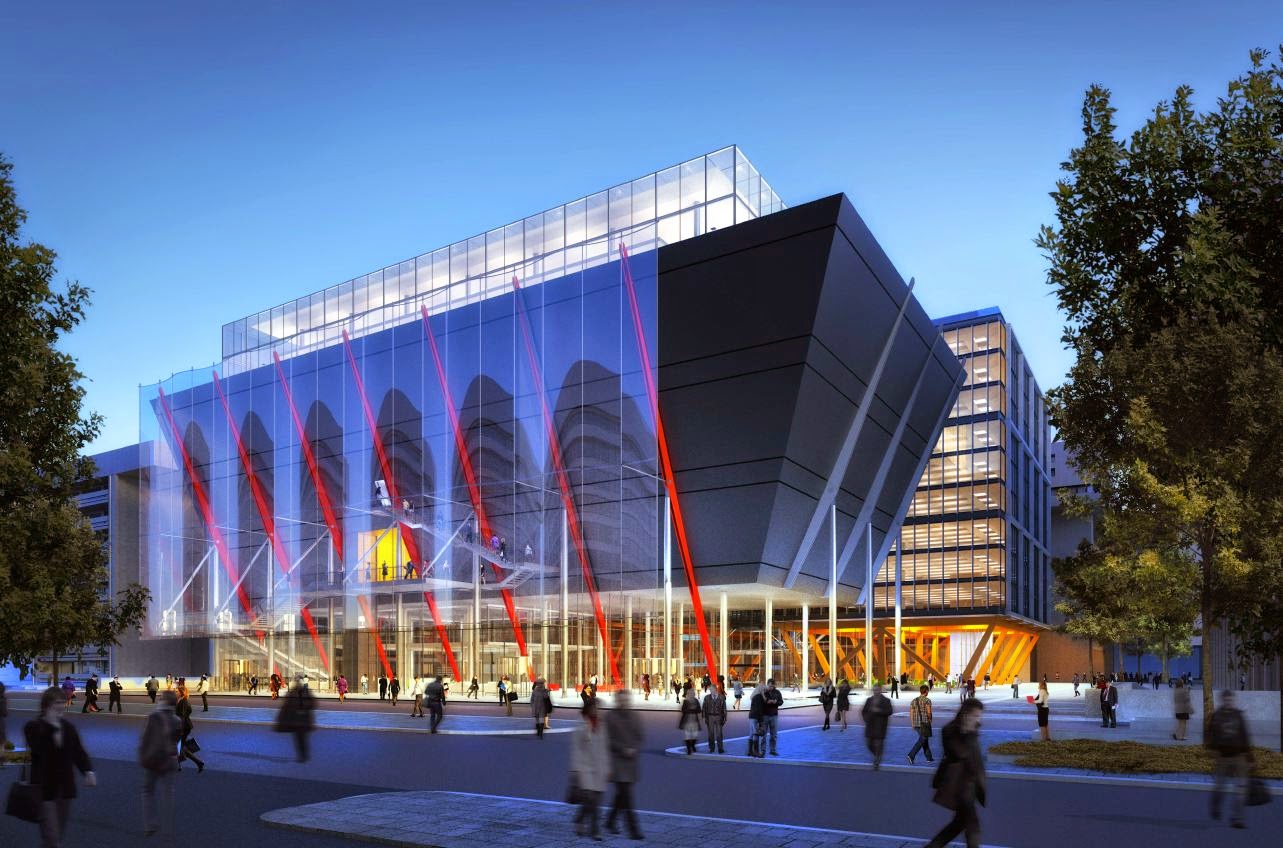 Although it appears that plans are moving forward to bring the International Spy Museum to L’Enfant Plaza, the deal is not done yet. In an email to SWTLQTC, Matthew Blocher from JBG stated: “It is important to note that we are in discussions with the Spy Museum, though contrary to the reports in various media sources, we do not have a deal at this point in time. We are very excited about the possibility of the Spy Museum coming to L'Enfant as we believe that it would provide an incredible amount of energy to this area of Southwest, similar to their impact when they opened in the Penn Quarter.”

Nevertheless, a revised concept plan for 900 L’Enfant Plaza was presented to the Commission of Fine Arts (CFA) on April 16, which included a six-story building facing 10th Street that would be used as the new home of the Spy Museum. Behind the museum is a courtyard and office building. Previously, 900 L'Enfant Plaza was planned as strictly an office building. Below are some additional renderings of the proposed museum and office building, designed by Rogers Stirk Harbour + Partners, that would be located in the plaza.

In a letter to developer JBG dated today, the CFA stated their support for the idea of the International Spy Museum to move to L’Enfant Plaza and general concept. From the letter:

They commended the project team on the planning and design of the building and site, expressing support for the concept of projecting the museum’s west facade into public space for this particular program and location.

However, the Commission has concerns about the positioning of the proposed buildings and some design elements. The development team will need to go back before the CFA with a revised concept submission.

If the International Spy Museum relocates from Penn Quarter to L’Enfant Plaza, it could serve to draw people south from the National Mall on their way to The Wharf. The addition of 600,000 to 700,000 annual visitors to the area (the current number of visitors to the Spy Museum) would help transform this office-heavy area of Southwest and dovetails with the SW Ecodistrict Initiative, which calls for a better mix of uses, including museums, residential, and hotels.

Renderings courtesy of the Commission of Fine Arts
Posted by SWill at 11:53 PM 2 comments: 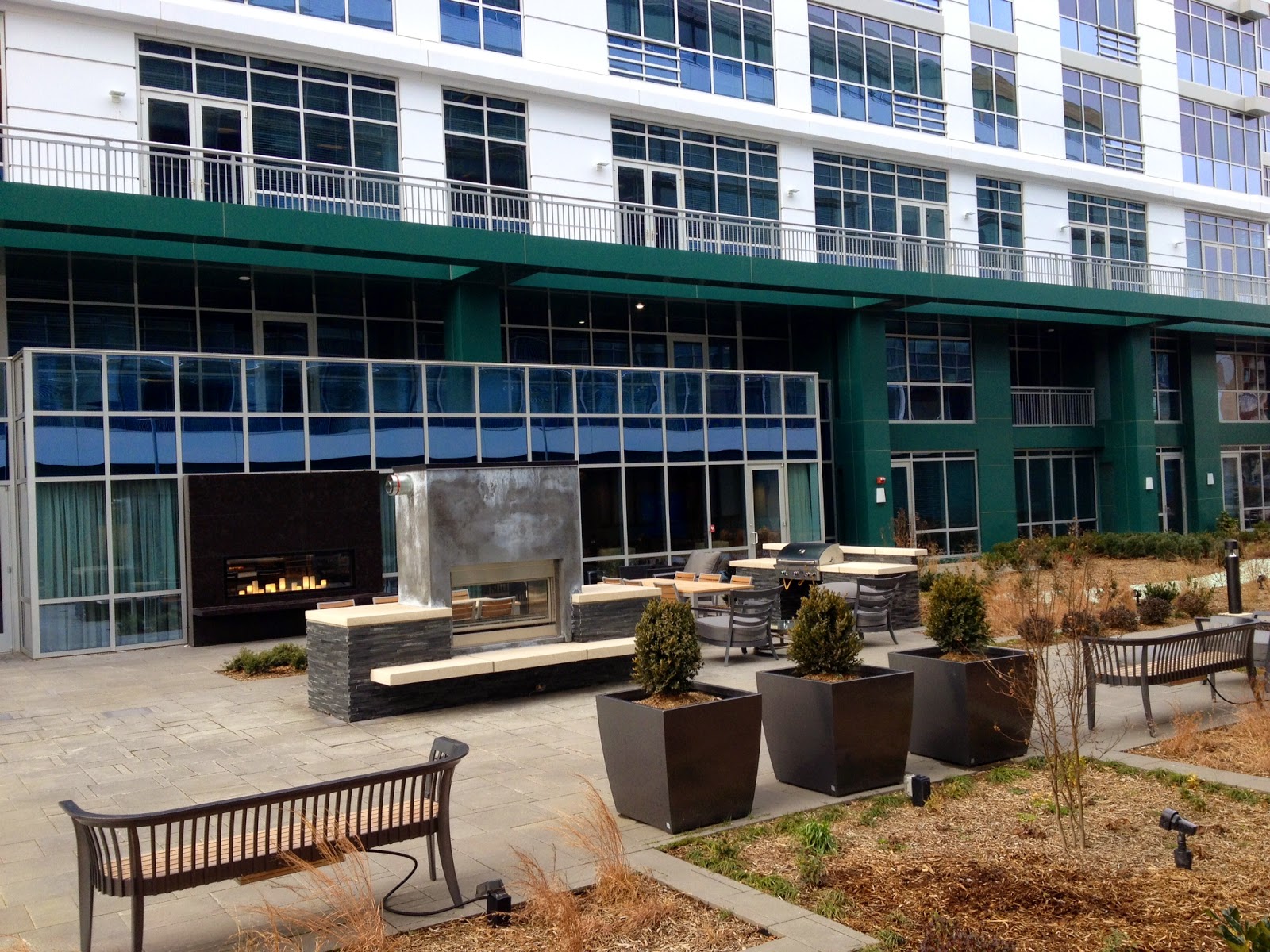 In Delta Associates’ recently-released First Quarter 2015 Mid-Atlantic Class A Apartment Report, it shows that rents in the Capitol Hill/Riverfront submarket (which includes Southwest) increased by 3.2% over the past 12 months, while rents in the city as a whole decreased by 1.3% as a slew of new projects entered the market. Stabilized vacancy in the area, which only includes projects that have reached stabilization (or 95% occupied), is at 3.6% - the lowest rate among submarkets in the District. 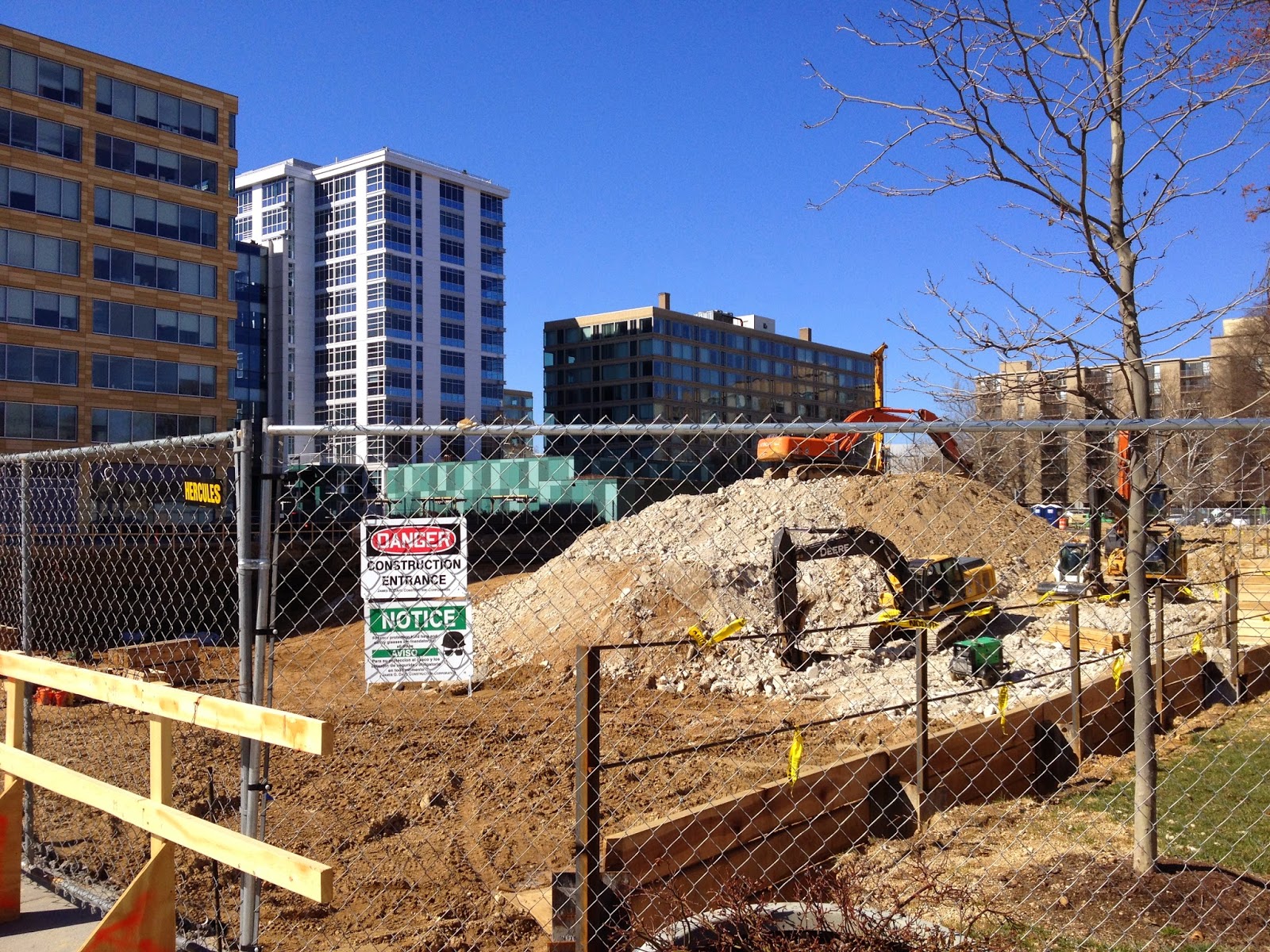 However, there are several projects under construction and planned for the neighborhood. There are four apartment projects under construction, including three at The Wharf and one at Waterfront Station, totaling 811 units. Two other apartment buildings are planned that may deliver over the next 36 months, including the St. Matthews site at Delaware Avenue and M Street and an addition to Capitol Park Tower at 4th and G streets for a total of 471 units.

On the Class B apartment front, Delta’s First Quarter 2015 Washington Metropolitan Area Class B Apartment Report indicates that rents in the Southwest submarket are down 3.3% from a year ago, but over the past 5 years, rents have increased on average by 2.8% per year. Similar to the Class A market, vacancy is low – it is 3.5% in Southwest compared to the city-wide average of 4.4%.
Posted by SWill at 7:42 AM No comments: 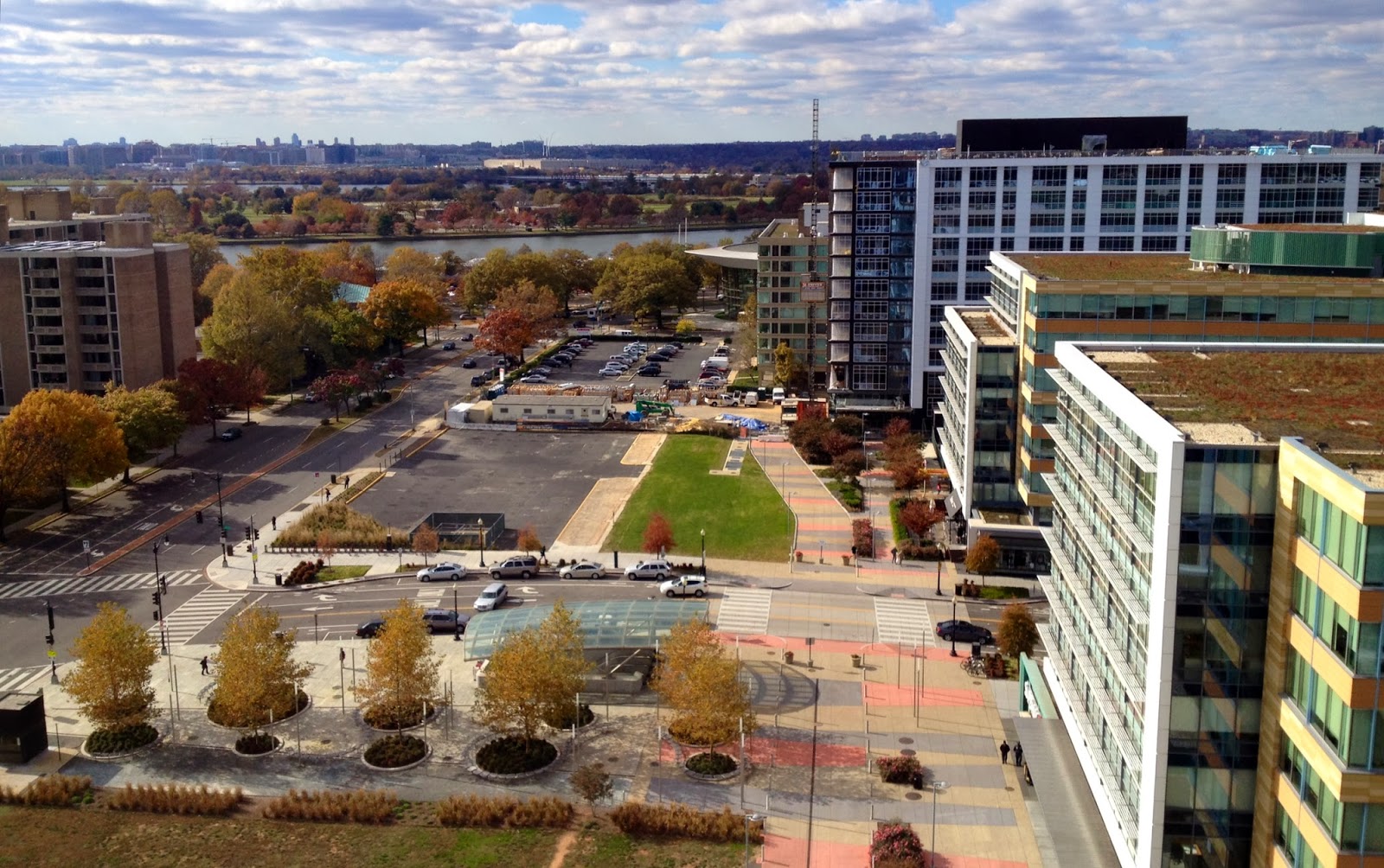 A night market called Market SW will begin operations next month at Waterfront Station. At February’s ANC 6D meeting, the developers of Waterfront Station mentioned that the asphalt lot facing M Street would be activated with temporary uses starting this spring, including a night market. Temporary uses for the two M Street lots were proposed in order to get ANC support for a two-year extension of PUD approval. The two sites will eventually become office buildings, but the office market is challenged right now and speculative construction is too risky. Meanwhile, an apartment building is currently under construction on the northwest parcel and the Deputy Mayor for Planning and Economic Development will soon release a Request for Proposals for the District-owned northeast parcel.

Diverse Markets Management will operate Market SW. This is the same group that operates the Downtown Holiday Market, the Flea Market at Eastern Market, and has operated the market at the annual Southwest Fireworks Festival. Market SW is billed on its website as “an evening of arts, food, flea & fun live music + performances.” Market SW will be held on the Fourth Friday of each month from May to October. The first SW Market will be on Friday, May 29 from 4 – 9 pm. Below are the dates when the market will be activated this year:
Posted by SWill at 12:27 AM 1 comment:

Review of 'The Originalist' 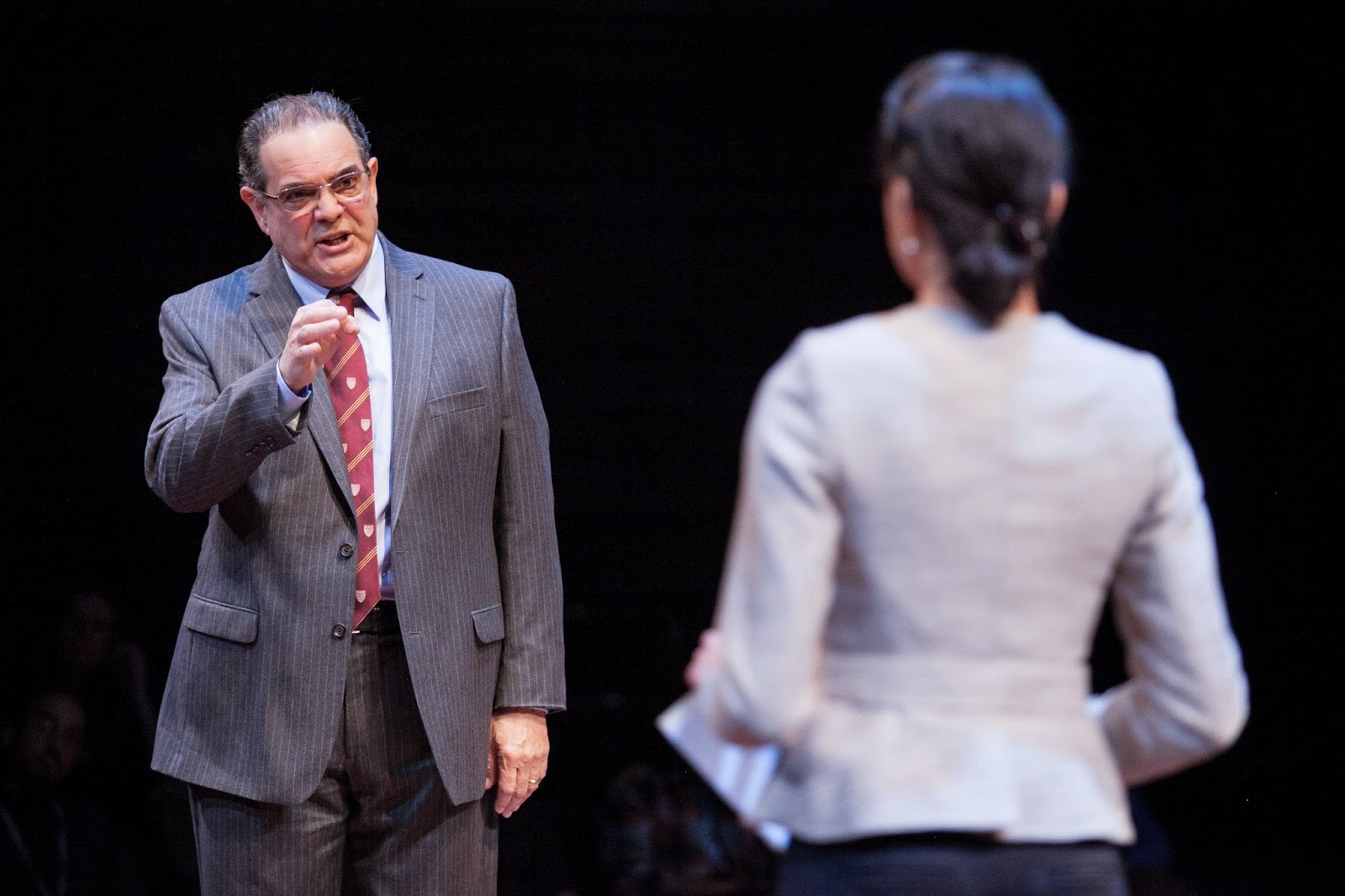 The Originalist, written by John Strand and directed by Arena Stage’s Artistic Director Molly Smith, tells the story of Supreme Court Justice Antonin Scalia, a polarizing figure that has been on the court since President Ronald Reagan nominated him during the 1980s. The play takes place during the 2012-13 timeframe and is considered to be historical fiction. Starring Edward Gero as Justice Scalia, the show begins with Scalia giving a talk at Georgetown University, where he is interrupted by Cat (played by Kerry Warren), an aspiring liberal grad that would like to become a clerk – for Justice Scalia. As the show progresses, it’s clear that the two are unevenly matched during their sparring matches – in more ways than one. While Gero’s performance as Justice Scalia is stellar, bringing gravitas to the role, Warren falls flat. Despite the uneven performances, The Originalist is a success due to Gero’s convincing portrayal of the conservative lion of the Court.

The Originalist has been extended for an unprecedented second time. The show will now run through May 3 at the Kogod Cradle and will return on May 19, running through May 31. Tickets can be purchased here.

Photo by C. Stanley Photography, courtesy of Arena Stage
Posted by SWill at 11:01 PM No comments: 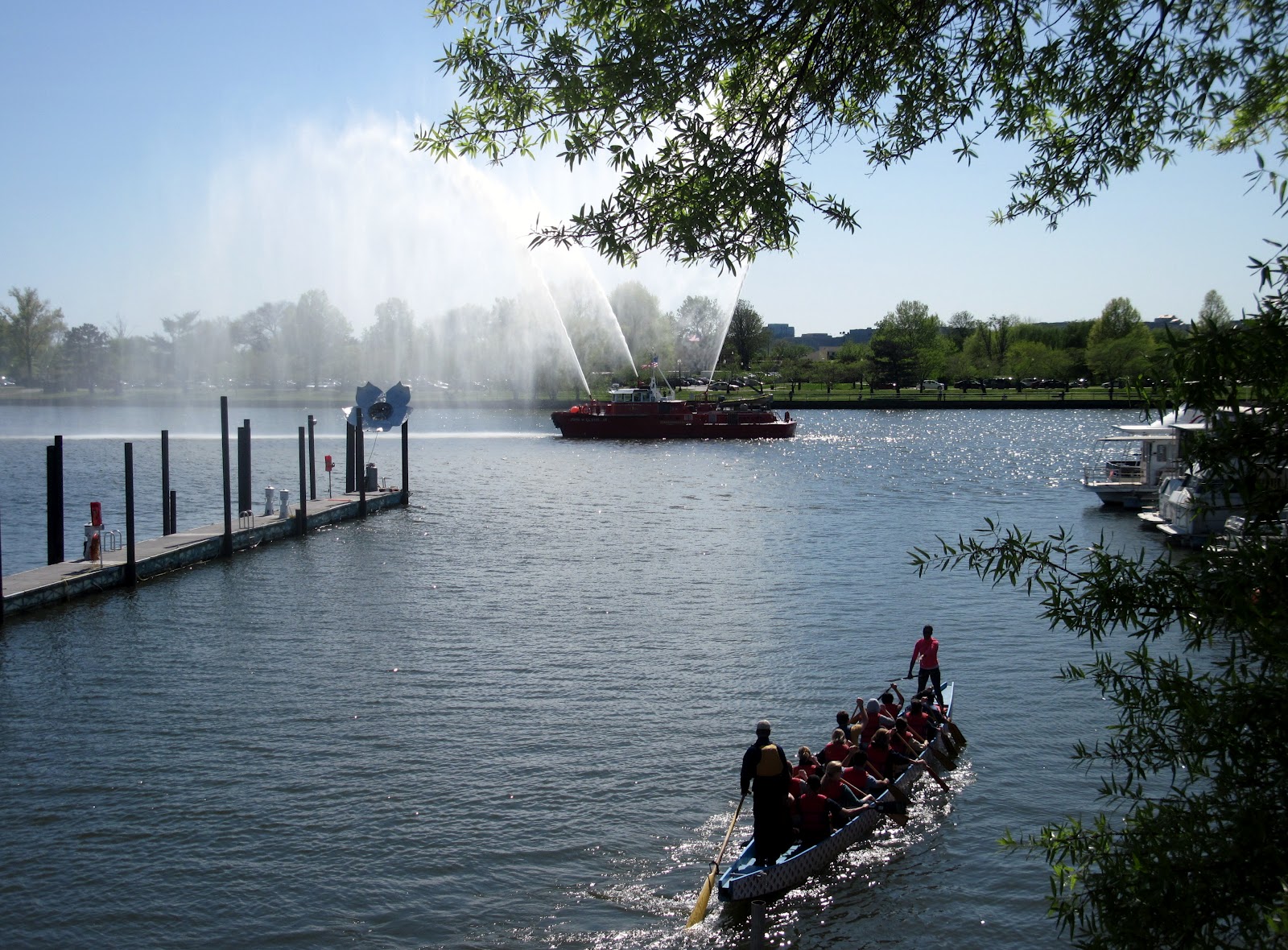 Tomorrow is the annual Southwest Waterfront Fireworks Festival from 1 to 9 pm. The festival is one of the signature events of the National Cherry Blossom Festival and is free. Due to the construction of The Wharf, the activities have shifted downchannel toward the Gangplank Marina Park. There will be three stages as well as events along the waterfront and in the Washington Channel. As in prior years, there will be food trucks, family activities, musical performances, crafts, and a beer garden. The festival will conclude with the fireworks spectacular at 8:30 pm. For more information, check the National Cherry Blossom Festival website.
Posted by SWill at 10:49 PM No comments: